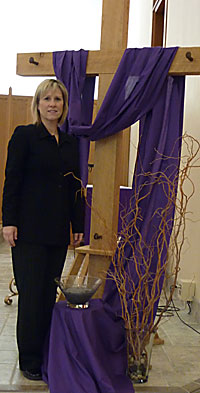 Sheila Kane-Morrison said she found a home at St. Francis of Assisi Parish. She and sons Miles and Jeremy will be received into the church at the Easter Vigil. (Photo by Rachel M. Gretzinger | For The Compass)

For a decade after leaving the Methodist Church, Sheila didn’t make any efforts to find a new church.

“I strayed away from the church because I didn’t agree with the teachings. But I always felt guilty about not providing a structured religious upbringing for my sons,” she said. Although she wasn’t attending a church for those 10 years, Sheila prayed constantly, asking God to guide her on the right path.

In 2005, Sheila’s husband took a job in Kohler and the family moved from their suburban Chicago home to Manitowoc in 2007. Her two youngest sons, Miles, 13, and Jeremy, 15, were immediately enrolled in public schools. When Sheila heard about Roncalli and St. Francis Cabrini Catholic schools, she scheduled tours.

The boys fell in love with the schools and decided to enroll. Once her sons were settled, Sheila got involved at Cabrini. When Jim Clark, the principal, asked for officers for the Booster Club, she thought, “This is something I could do that doesn’t have anything to do with being Catholic.” So she volunteered. She started to get entrenched in the school, and watched as both of her boys underwent a transformation. “They were happy. It was a joy for a mother to see,” she said.

Jeremy would come home from Roncalli and talk about Fr. Dan Schuster, who was “the coolest priest on the face of the earth.” One day, Jeremy told Fr. Schuster that his necklace was really cool, and Fr. Schuster replied, “You know, Jeremy, it’s not all about looking cool. It’s about having faith.”

Jeremy responded, “I have faith, but I’m not Catholic.” Then Fr. Schuster said, “Well, if you ever want to change that, let me know.” Jeremy came home and shared this story with his mom. Because she liked the change she was seeing in him, she responded in the same way: “Let me know.”

It was about this time that Sheila began attending Masses at St. Francis of Assisi. “I was feeling the pull,” she recalled. “There was something about this community, this church.” So she started reading literature online and found the structure of the church and the “concrete rules” simple and inspiring.

“The Holy Spirit literally filled my heart when I was at Mass sometimes,” said Shiela. “I even teared up a couple of times.” One night at an awards ceremony, Sheila found herself sitting next to Fr. Schuster. At the end of the ceremony, Sheila said to him, “My children talk about you all the time. They’ve expressed an interest in becoming Catholic, and I am interested too.” Fr. Schuster proceeded to tell her about the RCIA program, which she, Miles, and Jeremy enrolled in last summer.

Other life events were running concurrently with Sheila’s conversion experience. Her husband, Wayne, lost his job at Kohler and had been unemployed for almost a year. In the meantime, their oldest son, Zachary, 21, was diagnosed with brain cancer and was given six years to live. Sheila and Wayne had accumulated a lot of debt due to the medical bills and were behind on their mortgage payments. It was getting so bad that Sheila wasn’t sure if she’d be able to send her kids back to Catholic school.

When the boys heard this, they were devastated. Sheila talked to Connie Heinzen, public relations and marketing director at St. Francis of Assisi Parish, and John Stelzer, principal of Roncalli, about her struggles. She was shocked by the response.

“We’re not Catholic — they had no obligation to us; but they said, ‘Once you’re with us, you’re family, and we’ll take care of you,'” said Shiela. Anonymous donors from the schools and from the parish community gave scholarship money for Miles and Jeremy. “If that didn’t seal the deal, nothing did. That’s true love. That’s Christian charity. That’s what it’s all about.”

Sheila, Miles and Jeremy will be confirmed at the Easter Vigil Saturday at St. Francis of Assisi Church. “I feel like this is forever — not just a stepping stone like the other churches we’ve belonged to,” said Sheila. “I feel like I’m already Catholic — I am in my heart.”