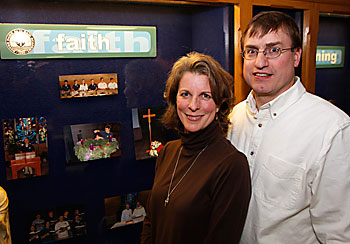 John and Janet Smith (Rick Evans | For The Compass)

“We have been blessed with a beautiful family and everything we do celebrates that,” Janet said. “Our hope is that our children will continue to celebrate the dignity of all people and be advocates for those who cannot always speak for themselves.”

The Smiths ask for no credit or acknowledgement for their volunteering. However, their dedication to doing their part to help others couldn’t go unnoticed. Recently, the entire Smith family was recognized for their extensive volunteer work by the Kids Care Club/HandsOn Network with an all-expenses paid trip to Disney World in Orlando.

Kids Care Club/HandsOn Network is an organization that helps elementary and middle school children develop an interest in service and volunteerism and the concept of social responsibility.

The Smiths were selected by Disney and the HandsOn Network to represent Wisconsin as the outstanding volunteer family in the state. One family from each of the 50 states, as well as one from Mexico, Puerto Rico and Canada, was chosen to participate in the Family Volunteer Celebration at Epcot Center.

John and Janet, along with their two youngest daughters, made the trip to Florida — their first ever — to enjoy the Disney Parks and to interact and converse with other volunteer families chosen for their efforts to help others.

The Smiths were nominated for the award by Liz Goldman, St. Matthew Middle School teacher and area Kids Care facilitator.

“I would describe the Smiths’ spirit of volunteerism as a natural part of their daily lives,” Goldman said. “They have truly lived out an example of volunteerism and that example has ignited not only in their seven children, but in many other families who know them.”

The Smith family has been involved in a variety of volunteer projects, including the 40 Days for Life, a peaceful, prayerful vigil to promote life and bring attention to the defense of the unborn.

“We spent time as a family being a visual witness to this cause,” Janet said.

To promote respect for family and life at all levels, John and Janet have also participated in marriage preparation for the engaged, a collection to support unwed mothers, volunteering at a community back-to-school drive for children in need, packing food at a local pantry and visiting with the elderly at a neighborhood nursing home.

Goldman said it took some convincing to get Janet to accept the volunteer recognition. “(Janet) feels that what they do is simply what everyone should do, which is part of the reason I chose them. They will be wonderful ambassadors,” she wrote in the nomination letter.

John and Janet are often seen around the school and parish volunteering in any capacity they are able — whether it’s volunteering during the lunch hour, painting murals or coaching sports.

The Smith children are also very active in volunteering. Their oldest son, Dan, and his wife Rachael, are in the beginning stages of entering the Peace Corp. Lizzy is currently involved with Kids Care through St. Matthew School, participating in Salvation Army Bell Ringing, Parties for a Purpose, fund-raising for Heifer International, visiting the elderly, preparing meals for a local homeless shelter, volunteering at Paul’s Pantry and writing letters to soldiers who have been injured on duty.

The other Smith children have also given their time and talent to both school and church service projects.

According to Goldman, what sets the Smiths apart is that they don’t really see what they are doing as acts of service.