From neophyte to RCIA director 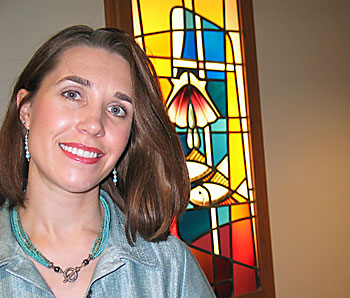 “For me, it’s a dream job,” said Natasha. “Being a stay-at-home mom, this works around my schedule. We meet on Saturdays. And getting to go and talk to people about your favorite thing? I said, ‘Sure, sign me up.'”

Ten years ago, Natasha was a graduate student at UW-Oshkosh. She and her husband, Chris, had just become engaged. While Chris was Catholic, Natasha had been raised in a devout Missouri Synod Lutheran family. “I was very happy being Lutheran,” she said.

She and Chris had been high school sweethearts since age 16 and, in college, both had drifted a bit from their respective faiths. They, however, regularly attended Sunday services — though it was sometimes at a Baptist church, or an evangelical nondenominational one. They both felt that it was OK, “as long as it was Christian.”

However, since Chris was Catholic, they most often ended up at Sunday Mass at the UW Newman Center. One September evening in 2001, Natasha read a bulletin announcement for a meeting explaining the Catholic faith. Visitors were welcome.

Natasha thought of the times when she had attended church events with Chris’ family. She’d felt a bit confused by “all those Catholic gestures, the up and down and the kneeling, I never knew what was going on.”

So now that they were engaged, she thought she’d go to this class and “learn all the gestures so, when I go to his family gatherings, I’ll be doing it with them.”

Chris went along. But it was soon apparent that the people in class knew each other and there was a pattern to the questions. It was, in fact, an RCIA inquiry class. Feeling out of place, Natasha tried to excuse herself.

Instead, the group welcomed her and her questions.

Chris walked Natasha home later. She was “uncharacteristically quiet.” When Chris asked if she was OK, she was surprised to hear herself say, “I’ve decided to go back next week. And this is going to sound really crazy, but I’m pretty sure I’m going to become Catholic.”

Natasha never looked back. Chris became her sponsor and on March 30, 2002, three months before their wedding, Natasha entered the church.

“Eight years and three kids later,” she said, there are no regrets. “Every morning for the last eight years, I wake up and my default mode is “Wow, I’m so glad I’m Catholic. … I should have a shirt: ‘I love to be Catholic.'”

Her faith reenergized her husband. Natasha said the family now has a library of Catholic materials and “a lot of that is Chris’ doing, not mine.”

The couple also have three children — Vincent, 6, Jazelle, 4, and Marcella, who will be 2 in June. Natasha home schools the older children and Chris’ responsibility is religious education in the evenings.

“My goal,” he said, “is to have my three kids grow up to know and love the Catholic Church and have a permanent home here.”

Once she completed the RCIA process, Natasha immediately wanted to help others explore the faith. She volunteered at St. Peter Parish in Oshkosh (now part of Most Blessed Sacrament), but there were no openings specifically in RCIA. When the family moved to Neenah four years ago, Laux was happy to have her attend the weekly meetings during Lent.

“I didn’t do anything,” Natasha admitted. “I just enjoyed being there and prayed for the catechumens and candidates. I did that for one year.”

The next year, she wondered if she would be needed. When the schedule for the fall inquiry classes came out in 2008, though, Laux used Natasha’s schedule to ask if she would consider taking over the program in 2010. The request made Natasha cry.

“I had wanted to be involved in RCIA and this was unbelievable,” she said.

Chris immediately went out for flowers and pizza and the family had a party. “Your dream is coming true,” he told Natasha.

“I had been ‘eyeing’ Natasha almost from the beginning as a potential successor,” said Laux. There were several reasons, Laux said, but one was because “she was ‘on fire’ and in love with her new-found Catholic faith.”

“I keep thinking,” Laux added, “that the Holy Spirit was definitely at work, and that the transition was one of those ‘God moments.’ The St. Gabriel RCIA process is definitely in good hands.”

Natasha spent last year observing Laux. This year has been what she calls her “nuts and bolts” year and she is already looking forward to next year. That’s when she can focus all of her attention on people’s questions and stories.

“There is such a wide range of questions,” she said of the classes. “I find myself researching a lot. That was humbling. I’m not a Scripture scholar, not a theologian. I told them that the one qualification I have is that I love being Catholic. I hope that people will see that when I talk about the Catholic faith, that people will see that I am seriously happy about this and that it will entice them to want to learn more.”