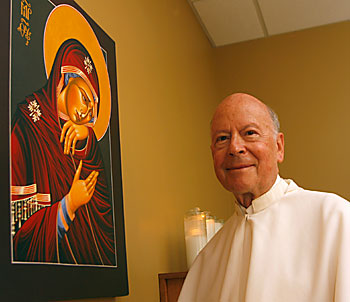 Norbertine Fr. Alfred McBride admires an icon of Mary at Old St. Joseph Church located on the campus of St. Norbert College in De Pere. (Rick Evans | For The Compass)

Despite the seemingly constant stream of bad news regarding the priesthood, Fr. McBride is here to say that the priesthood is alive and well and undergoing a spiritual resurrection.

Each chapter of the book highlights a characteristic that Fr. McBride sees as an essential part of an authentic priestly vocation. At the top of his list is the need for the ordained to stay close to Christ. He explains that the story of Peter and Jesus, after Christ’s resurrection, is a perfect example of this relationship.

“Jesus asks Peter after his denial, ‘Peter do you love me?’ Every priest gets the same question,” Fr. McBride points out. “It is the principle question the priest has to pay attention to. In other words, do you have a relationship with me? Do you want to stay with me? Will you stay with me to the end?”

Fr. McBride describes the importance of living a life of sacrifice as another key to leading a life of holiness. For the priest, this sacrifice is intimately tied to his regular offering of the Mass.

“Just as you put Jesus on the altar of sacrifice, a priest has to put himself on that altar. Without that, he is not really fully realizing his relationship to the Eucharist,” says Fr. McBride. “It will be known; people will see that. If he is not a sacrificial priest, then his Mass will be valid but his priesthood will be empty.”

“A Priest Forever” is Fr. McBride’s 45th book. His first work, “Homilies for the New Liturgy,” was published in 1965. He has had hundreds of articles appear in Catholic publications over the years and was a syndicated columnist in the Catholic press in the 1970s.

“I never knew I would write so much,” says Fr. McBride. “I was 35 when my first article and book were published. What helped me after that was the fact that I had a national platform. I was at Catholic University and head of the National Catholic Educational Association and in Washington, D.C., for some 20 years. Publishers sought me and I sought them.”

In his more than five decades as a priest, Fr. McBride is most grateful for all God has called him to. He says experiences such as meeting Pope John Paul II during his second visit to the United States and being surrounded by close to 1 million young people singing and praising God at World Youth Day 2005 in Cologne, Germany, are just a snippet of some memorable moments in his own life.

“As a priest, people tell you that you mean something to them. You are almost welcomed immediately into somebody’s company.”

In his book, Fr. McBride says that he sees the priesthood here and abroad on the path towards real renewal.

“The stirrings of resurrected life can be detected at every level of priestly life. The seminaries have more students and many dioceses have more ordinations. Priests appear to be more confident and less morose about their identity. We are on the move…,” he writes.

As for his own future, Fr. McBride says he has no plans of slowing down. Within the last year, he has had two books published and a number of projects and the manuscripts are in the works.

“My secret is that I like to write,” he says. “I like to make the complex and more difficult topics more accessible to the general public.”