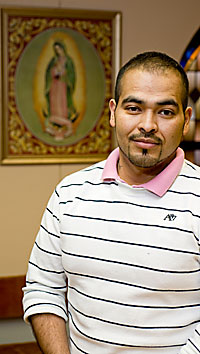 Elias Nieto, who has battled drug and alcohol addiction, said his life turned around after attending a retreat at The Bridge. He now helps with Hispanic youth retreats at St. Willebrord Parish in Green Bay, where he will receive his first Communion. (Photo by Sam Lucero | The Compass)

When he was 4, Nieto’s father came to Green Bay to work, leaving his mother to raise their six children. Even though his family was Catholic, Nieto did not like going to church. His view of God as a source of punishment kept him away, and when his favorite cousin, Javier, died when Nieto was 6, those views seemed reaffirmed.

“When he died, it made me feel really bad. I looked up in the sky and said (to God), ‘Why are you doing this to me?’ I went through a lot of depression when I was a little kid.”

When it came time for his first Communion, Nieto did not attend classes and his mother was too busy raising six children to make him go. The boy who felt abandoned by God abandoned the church.

When Nieto was 16, his father applied for resident cards for his family and they moved to Green Bay. Nieto enrolled in high school and soon got involved in alcohol, drugs and gangs. “I started hanging around with the wrong people,” he said. “People that didn’t know anything about God.”

As a gang member, he said he found what had been missing in his life. “At that time, these guys gave me the support, the love that I was looking for at my house,” said Nieto. “They made me feel like I was important.”

Only after years of cocaine and alcohol abuse did Nieto finally realize that his life was heading in the wrong direction. “Obviously it wasn’t good because all we did was just drink. I became an alcoholic and unfortunately I had to go to jail two times.”

His lifestyle resulted in him becoming a father out of wedlock — by two women.

“I have three kids right now. When my first came, it wasn’t a kid that I wanted to have. I left his mom when she was pregnant,” he said. “I even prayed to God, ‘I hope that kid is not mine so I don’t have to pay child support.’ I regret what I did. A lot of things changed my heart.”

At his lowest point, Nieto said he just wanted to end his life.

“I was doing drugs every day. I was trying to kill myself,” he said. “The only thing that went through my head all of the time was finding an easy way to die. I just didn’t want to live anymore.”

Three years ago, after his second arrest and jail, his sister, Nancy, suggested he go to The Bridge of Green Bay, which offers 12-step programs for people with addictions.

“I was like, ‘I’m OK, I don’t need help.’ But inside I was crying. I wanted to (get help), but I wanted to act tough all of the time,” he recalled. Nieto was in another relationship and had two more children. “My kids started seeing the same thing I saw when I was little: me and the mom fighting all of the time.” After his arrest, his girlfriend told him to leave.

Abandoned and depressed, he took his sister’s invitation to a meeting at The Bridge.

“They told me I was going to do a spiritual retreat and that’s what I did,” he said. “I found out that I wasn’t living a life with God. I found out who Elias really was and why he was acting the way he was. … I was so confused. God was there the whole time but I wasn’t following his rules. I was following my own rules.”

Nieto’s views of God changed. Instead of seeing God as punishing him for his mistakes, he began seeing the ways God was trying to help him — in the work of his high school teachers who spent extra time helping him to graduate in 2000 and in the encouragement of his boss at Prefinished Staining Products in Green Bay, where he has worked for eight years.

“At my work, I know God was with my boss. Otherwise he would have fired me the second time I missed work. I used to miss at least one day or two a week and he was always like, ‘Elias, what’s wrong, do you need help? Tell me how I can help you.'”

Nieto said he nearly died three times due to cocaine overdoses, “and a lot of times I was driving drunk. I thought God was bad and he was never there with me. Now I know he was with me all of the time.”

Choking back tears, Nieto, now 28, said he is thankful to his sister for encouraging him to seek help. He has been free of alcohol and drugs for three years and has vowed to make his three children, ages 4, 4 and 2, the center of his life. “My kids told me they love me. They are happy and I’m happy, too, with them. It’s kind of hard because I have to pay the consequences for my acts and I know it’s not God’s fault. It’s my fault.”

He is only allowed to have custody of his children on Saturdays.

“Every time I get to spend with them I just become a little kid,” he said. “I want them to do what I wasn’t able to do — spend time with my dad. I want them to have fun and don’t start looking for the wrong love.”

After The Bridge retreat, Nieto started attending St. Willebrord Church, sometimes for Mass and sometimes just to pray and ask God for forgiveness.

On one occasion, while praying at church, Erica Sanchez, who directs the parish’s annual retreats for Hispanic youth, approached Nieto, asking if he would help at a retreat. “I said, ‘Sure, what do you want me to do?’ She said, ‘I need someone to talk about drugs and alcohol.'” His tattoos were signs of his past gang and drug activity, he said.

It was Nieto’s invitation to become active in the parish and make a difference in other peoples’ lives by sharing his story.

“I love it,” he said about helping with the retreats. “It’s really nice seeing kids wanting to be better and especially kids that are struggling in high school. Two years ago, after I talked to them and told them about my problem with drugs and alcohol, a lot of them got it. A lot of them started crying. We all cried together.”

Last September, he joined the parish’s RCIA program, seeking to formally reconnect with the church. At the Easter Vigil, he will receive his first Communion. (Nieto said he received the Sacrament of Confirmation in Mexico when he was 5).

“Every time, when I come to church now, I see these people standing up and (going to Communion),” he said. “I’m just craving it. Something inside of me is like moving around. I just want to be a good example for my kids. I don’t want to be the same dad that I used to be.”

Nieto said he believes God is now working through him to help others, just as others helped him. Thanks to St. Willebrord Parish, he has found a way to make a difference while growing closer to God.

“When I came to church (as a child), I came because my mom and dad told me to,” he said. “Now it’s something that, if I don’t come, I’m not OK. I need to come here because I found peace with God. That’s something that I never had in my life. I find joy. I’m finding a lot of friends here that are not offering me drugs or alcohol or asking me to do bad things. It feels really good when I can help the others.”