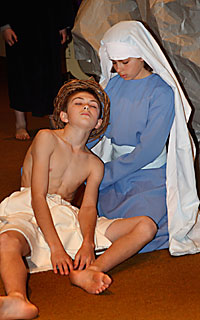 Jesus, played by Josh Meyer, dies in his mother Mary’s arms, Danielle Breckheimer, after being taken down from the cross. Chilton Area Catholic School stages the Passion play every other year. (Photo by Rick Evans | For The Compass)

This year, he has stepped into the role of Jesus, which he describes as an honor and a learning experience.

“Carrying the cross is hard because it’s heavy,” he said. “It digs into your shoulder. You learn by being Jesus because you are actually in his place.”

The school performs the Passion play every other year. The production, featuring costumes and props, is narrated and incorporates music and select voice responses. This year’s cast consists of 39 students in grades four to six.

Sixth grader Danielle Breckheimer played one of the weeping women in the 2008 production. She portrays Mary this year. Being a part of the Passion play makes the Lenten season and Easter more meaningful, she said.

“You learn exactly what happened,” she said. “You get to see what happened and it makes you think about it more. This was actually what was going on.”

“I hope they take away just the whole meaning of the Passion because it’s the most important feast of the year,” said Amy Guerin, who teaches sixth grade and serves as one of the play’s directors. “I hope they understand why Jesus came and did what he did.”

The narration eliminates the need for the children to learn lines, but it creates other challenges, added Guerin.

They have to speak through their bodies, which I think Jesus did so much,” she said.

“It’s kind of hard,” said Meyer. “I was backup Santa for the Christmas play and you had to do speaking for that. This is hand motions.”

The teachers/directors select the students’ roles.

“I’ve been here since 1994 and as they come up (through the grades) you can almost see who fits the parts,” said Guerin. “It’s not only who is going to be a good actor, but who fits the role. For example, I think our Peter (Caleb Stiefvater, fifth grade) this year is great because he is a little bit more soft spoken, but is strong like you would imagine Peter to be.”

During the off year, if possible, the students see a Passion play, such as the production in Eden, Wis., said Liz Rollmann, principal.

The school production stages a matinee and evening performance on Wednesday, March 31, of Holy Week. The evening audience, which includes religious education students and their families, usually fills the church, said Rollmann.

“You can manipulate the lights better in the evening,” said Guerin. “The audience is moved. There is a scene with music and a hammer, which really builds up. It is pretty powerful.”

“It’s nice at the end when everyone leaves in silence,” said Rollmann. “I think some people are surprised by the emotion of the children acting it out.”

The play has received positive reviews over the years, including praise from Rollmann’s parents who attended the renowned Oberammergau Passion play in Bavaria, Germany, which dates back to 1634 and is performed one year every decade.

“They came to our play, and said, ‘Why did we spend all that money to go to Oberammergau?'” said Rollmann.

Chilton Area Catholic students also participate in Stations of the Cross on Fridays during Lent and do shadow stations to further strengthen the meaning of the season.

“It makes the (Easter) baskets not look so important,” said Guerin.

rick evans | for THE COMPASS

Jesus, played by Josh Meyer, dies in his mother Mary’s arms, Danielle Breckheimer, after being taken down from the cross. Chilton Area Catholic School stages the Passion play every other year.