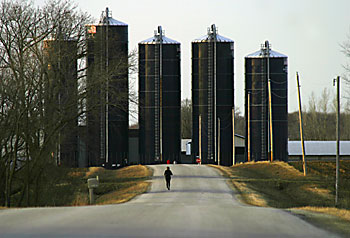 A jogger runs toward silos in northern Brown County. (Photo by Rick Evans | For The Compass)

Both events will include blessings of seeds, animals and farm equipment, special prayers for a fruitful growing season and a noon dinner with discussion to follow. Leading the discussion both days will be Jim Ennis, executive director of the National Catholic Rural Life Conference, based in Des Moines, Iowa, and Dr. Kristina DeNeve, diocesan spirituality and evangelization director.

Norbertine Br. Steve Herro, diocesan social concerns director, oversees rural life issues for the diocese. He said that he hopes the discussion addresses an issue that the diocesan rural life committee has noted this year:

“It’s the pain in the lives of people, over their kids and grandkids being separated from the church,” said Br. Herro. “So the idea (for the discussion) is that, if that is a situation in your family, how can you be true to yourself while grieving for the other?”

DeNeve noted that while parents and grandparents in rural and non-rural settings are grieving the same loss of children and grandchildren, in a rural community it is felt differently. 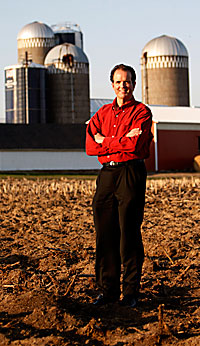 “In an environment where everybody knows everybody,” she said, “it changes how we reach out to others, but it also changes how we notice people’s absences and grieve the loss of people. It’s not better or worse, it’s just different.”

She said that in a more urban setting you might not know that the person in front of you in the grocery store isn’t practicing their faith. But it’s different in smaller communities.

“The whole community feels that loss. … So the loss is felt more acutely.”

Ennis, who has been with NCRLC for 18 months, said that whether one is in Dodge City, Stockton, Calif., or La Crosse, those on midsize farms, on family farms, are having tough times — both in their family life and with the economy.

“But they love the land,” Ennis added. “They want to be good stewards and want to support their families. And they are wondering what does the church have to say about their situation.”

Ennis said he wants to give people “moral strength to navigate through some challenging times” and part of that lies in the tradition of church teachings. People, Ennis said, are aware of the Scriptures and some church teachings, but many are not aware that the church also has social teachings. He said that even the most recent encyclical by Pope Benedict XVI, Caritas in Veritate, addresses real life situations they face every day.

“My message (at Rural Life Days),” Ennis said, “will be talking about the riches of the Catholic teaching, and also touch on the need for Catholics to read ‘their mail.’ We all have a lot of unread letters sitting on our desks.”

He explained church teachings are like unread letters. “It’s like a letter from someone who loves you and you never opened the letter.”

Br. Herro said his job in social concerns often leads him to look at rural life issues through the lens of government policy and legislative issues. He said that a big issue at the state level now is mega-farms and “the effect of things like the manure of mega-farms on rural ecology.”

He noted that the state DNR in January decided to allow one such farm in Rosendale. Rosendale Dairy will expand its operation to more than 8,000 cows, making it the largest dairy farm in the state.

Br. Herro said that mega-farms and wind turbines, such as the 100 planned for southern Brown County, “are sources of division” and that this is especially true in the Chilton area.

“There are those who embrace these (turbines and mega-farms) for ecological or financial reasons,” said Br. Herro, adding that many oppose them for the same reasons.

Ennis has seen similarly divisive issues as he travels the country.

“I get asked all the time, ‘What does the church say about confinement issues (mega-farms)? What size is ‘in’? I try to share the church’s principles. It’s difficult to say what size is crossing the line. But there are principles: such as use of land, water, employees, how they run a business. Obviously, animals can’t be treated cruelly. That is in the catechism.”

He also acknowledged that there are “gray areas” where we have to look at applying church teachings. Here, he said, we need to look at how a decision would impact the community. Would it hurt the land or put people out of work?

“There are some who say the church has no business in agriculture,” Ennis admitted. “Food is so critical; everyone needs to be fed. So it is sacred. … With someone who doesn’t want the church involved, there is a real concern about their soul. That is where evangelization comes in.”

For DeNeve, whose area is evangelization, the most promising sign about the Catholic faith in northeast Wisconsin is “that we are not diminishing in our sense of belief in God, importance of doing the right thing, importance of family. Those things remain constant.”