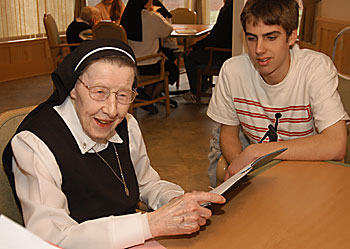 Sr. Frances Meyer, a resident of Franciscan Courts in Oshkosh, smiles as she reads the biography written about her by Lourdes High School senior Cody Boese, right. (Photo by Dick Meyer | For The Compass)

Dolan set up interviews with the sisters through Irene Hans, activities coordinator at Franciscan Courts. The students were apprehensive about meeting their interview subjects.

“They were very nervous,” said Dolan. “They were concerned they wouldn’t have anything to say. I brought in someone who works for the Chamber (of Commerce) and puts together magazine articles to talk with them about interviews. We brainstormed questions they could ask. (The students) were pleasantly surprised to find out that it was a lot of natural conversation and they learned so much from their sisters beyond the questions.”

“My initial reaction was, ‘I don’t want to do this,'” said senior Matt Weber. “When I thought about it and got closer to it, I got excited about it. It’s an interesting idea. I don’t know anything about nuns.”

Weber, who is considering the University of Minnesota or Santa Clara University to study pre-medicine, was paired with Sr. Ruth Linnebur, a native of Colwich, Kan. He said that he was impressed with her vocation.

“It opens your eyes to how they live and the decisions they made,” he said. “Sr. Ruth had no question. She wanted to be a teacher and she pretty much knew for a long time that she was going to be a nun. Nowadays, it seems like it’s years of thinking about it. She just always knew it was what she was going to do.”

Weber admits that he had some unfounded misconceptions about religious life. He quickly discovered some of Sr. Ruth’s fun interests.

“She is a huge football fan and sports fan,” he said. “We would sit down and talk for 10 minutes about the Olympics. I thought she is probably going to bed at 7:30 each night. Here she is staying up later than I am to watch Shaun White (snowboarder) do his halfpipe run.”

Hans assisted with matching the sisters with particular students. Senior Abi Nelezen, who takes German class at Lourdes, wrote a biography on Sr. Laetare Nieberle, a native of Bavaria, Germany.

“We talked about places in Germany and the places she has traveled,” said Nelezen, who will attend Marquette University in the fall to study biomedical science. “I found out we had more in common than I thought we did. She is a really cool lady.

“Even though we go to a Catholic high school, we’ve never had really in-depth interaction with nuns,” added Nelezen. “It was cool to see what they do in their day-to-day lives. Sr. Laetare wakes up at 6 a.m. every day. She prays and goes to Mass every day. It’s cool to see how really solid and balanced she is.”

The students met with the sisters four times to gather information and ask questions. Dolan witnessed their change in attitude as the project progressed.

“They first said, ‘What do we possibly have in common? I can’t believe you’re making us do this,'” she said. “They moved to the point where they wanted to do the best job they possibly could. They were worried about not doing the story justice. They really wanted to make sure they did their best work and that their sister would be proud of the final product.”

Sonja Yops, art teacher at Lourdes, supported the project by helping the students create books to present to the sisters.

“We wanted to make them look nice so it’s something they can keep,” said Nelezen. The students presented their books at a social on March 19 at Franciscan Courts.

“They’ve made connections,” said Dolan. “They admire these women for their lives of faith. This gave them an experience where they could see how someone has chosen to dedicate their whole life to Christ.”

Dolan said that she plans on doing similar projects in the future. She graded the biographies for the course, which is offered through St. Norbert College, but added that the project was much more than a writing assignment.

“It was really touching for the kids that some of the sisters had experienced World War II firsthand,” she said. “Walking out of Franciscan Courts that first day, some of the (students) were flabbergasted at what the sisters had gone through as young girls. You don’t often speak to someone who has lived that history. One met Mother Teresa. Yes, this is an English class, but it’s also about the kids growing as people. The sisters are such vibrant people.”