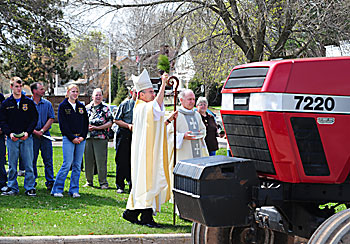 “God doesn’t ration the gift of the Holy Spirit,” he said. “It comes in super abundance, like the sun that shines upon everyone.”

Bishop Morneau said a good steward does four things: receives God’s gifts gratefully, nurtures those gifts responsibly, shares those gifts justly and sacrificially; and returns those gifts to the Lord in abundance.

“That’s what life is all about: to receive God’s gifts gratefully,” he said.

Like other people, he admitted taking many of God’s gifts for granted. “We can’t do that,” he said. “We have to be a eucharistic people and then we have to nurture those gifts responsibly.”

He joked that there was only one difference between himself and Phil Mickelson, recent winner of The Masters golf tournament. “He practices, I don’t,” said Bishop Morneau, who attended this year’s Masters with Bishop Robert Banks and Fr. Willie Van De Loo. “That’s why last week he won $1.3 million for just four days of golf. I didn’t make that much all year. He nurtured his gift.”

God gifts people, continued Bishop Morneau. “We have to nurture those gifts. Then we have to share those gifts in a two-fold way: justly and sacrificially.”

As followers of Christ, he added, “we are in a spiritual way of life, and as a farming community that is a special call because our garden feeds the world. God has entrusted that garden to us as a heavy responsibility, but it is also a very great privilege.”

In an interview, Ennis said traveling around the country and speaking to farmers helps him better understand farming issues from the grassroots level.

“There’s no way to replace face-to-face meetings with people and hearing their stories,” he said. “For instance, hearing nationally what’s happening in agriculture. When I start hearing personal stories of farmers who’ve lost their land, dairy farmers, because of low dairy prices, it’s much more compelling.”

By hearing personal stories, he’s better able to apply their concerns to public policy decisions that are presented nationally and locally, he said.

Ennis said in some places, farmers have lost hope. “It’s mixed. There are areas of hope for sure,” he said.

“In Ohio, the Catholic farmers I’ve been speaking to have a lot of hope and they are working very hard to find niches and find ways to differentiate their products,” noted Ennis. “I’ve also found farmers in Kansas who are feeling a little bit pressured because of the high feed costs for their ranches.

“What I do see is they are looking for moral support; for that moral voice in different public policies as well as helping inform parishes and pastors about what the issues are they are facing in their rural communities,” he said.

“There is a lot of hope in young people, both around their faith and also trying … to think about how they can start up new businesses,” he said. “Agriculture is one part of rural life. But there are other new businesses starting up, new areas of innovation such as renewable energy.”

Ennis said that agriculture was once “a major part of the economic engine” in rural communities.

“Now it’s a smaller part; anywhere from 10 to 20 percent of their economy, as opposed to 30 to 40 percent in the past,” he said. “You’re seeing some diversification in rural communities. So from an economic standpoint, but also from a faith standpoint, I’m seeing seeds of hope.”