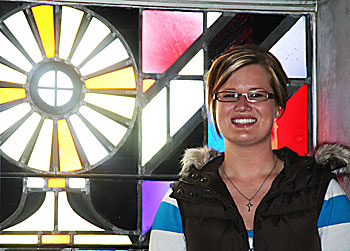 At the beginning of her senior year of high school, Anna sunk into a bit of a depression. She never knew what it was that caused it initially, but she knows that the tinges of depression became a whirlwind when, four days after Christmas, her first nephew died at 15 months. She was so angry at God that her rage became her only prayer.

Two times she tried to take her life by overdosing on pills. “The last time, I was lying in bed, sweating and shaking from taking these pills. And I said to God, ‘If you are this wonderful, all-loving God, and you have all these great things planned for me, wake me up tomorrow morning,'” Schmidt recalled.

She did wake up the next morning — and took it as a sign from God that he had plans for her.

Slowly, she began to inch her way back into her faith. She asked for time off from work to attend Mass, and she even began praying the rosary with her grandma again.

After graduation, Schmidt attended the UW-Oshkosh to become a teacher. “In college, I was a strong and proud Catholic — on the outside,” she said. Behind the scenes, though, she was drinking too much alcohol and cutting and failing classes.

In February 2007, while Anna was away at school, her “psycho-crazy Catholic” grandma, Monica Anna Geiger, had a massive stroke. “Grandma woke up early in the morning and got everyone to go to reconciliation and Mass. Then after breakfast, she was slumped over in her chair — dead.” Reflecting back on her grandmother’s life, Anna realized that through all of the hard times her grandma faced, she was a truly happy person.

After her grandmother’s death, Anna’s prayer life grew. She even began praying the rosary again. “Sometimes I say my grandma is my conversion story. Her life and death really made me realize that I need to do something with my life,” said Schmidt.

One night at UW-Oshkosh, Anna was walking back from a moving prayer service at the Newman Center, reflecting on her calling to be a teacher. Suddenly it started raining — a sign to her of her grandmother’s presence. Walking and crying in the rain, Anna began to pray. She realized that the only time she was truly happy was when she was at Mass or when she was with her family.

When she returned home, soaking wet, she called her brother and said, “I want to do something in the religious field, but I don’t feel called to be a sister. What can I do?” He said she should be a youth minister.

After doing some research about youth ministry, Anna was invited, out of the blue, to help out with a retreat. At that retreat, she met Sarah Gavin, Joel Stepanek and Kristin Bird, who were involved in the high school LifeTeen youth ministry program in Oshkosh.

“They gave me just the nudge I needed,” she said. “I followed Sarah (the youth minister) around like a little puppy dog.” Soon, Anna started volunteering for the core team. As she became more involved with the ministry, she decided she would transfer to Silver Lake College in Manitowoc to study theology.

Anna has been doing youth ministry, studying theology and loving God for two years now. “It’s all been happening really fast,” she said. “It scares me but that’s OK, because I’ve learned that you rarely get anything good out of an easy situation.” She doesn’t think her conversion is done yet. That scares her, too, because she doesn’t know what the rest of her conversion will require of her.

“So that’s where I am. I just wake up and write in my journal, ‘This day is for you.'” There are times when she gives up and won’t pray for a couple weeks. Then she remembers that it is not about her at all. “God brought me through everything and so I have to give it back to him,” she said.

Anna will graduate from Silver Lake College in the spring of 2012. But her ministry is not waiting until then. She is just finishing a fruitful year of coordinating the EDGE Middle School ministry program at St. Francis of Assisi Parish in Manitowoc and has recently accepted a part-time position as the director of youth ministry at her home parish of Holy Family in Brillion.