Czech youth gets taste of U.S. culture through Global Outreach 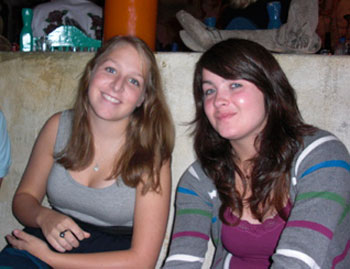 Lucie Chmelikova, right, is attending St. Mary Central High School in Neenah as an exchange student with Global Outreach. She is pictured with Natalie Constacio, whose father Mark is a Global Outreach coordinator. (Photo courtesy of Mark Constacio | For The Compass)

Chmelikova, a native of Brno, Czech Republic, said she arrived in Wisconsin this past August with an open mind and limited knowledge of the culture.

“I did not know much,” she said. “I knew where it was placed, but I didn’t know that they liked cheese and things like that. I wanted to get to know the U.S. other than just from the news.”

Speaking English was an adjustment, she added. English classes are required at the Jesuit high school she attends in her homeland, but the coursework primarily involves grammar exercises rather than speaking the language. She is studying both English and French this school year.

Chmelikova is the second Global Outreach exchange student hosted by the Constacio family. In 2005-2006, Andrius Laurinavicius of Vilnius, Lithuania, joined their household in the Milwaukee area.

“The first year, we really didn’t know what we were getting into,” said Mark Constacio, campus minister at St. Mary Central. “It was more of a plea for help by Marquette University High School. We were new to Milwaukee, having just moved there from Denver.”

Constacio’s son, Tony, was a junior at the time. The family saw an opportunity to connect to the high school, be of service and ease Tony’s transition to a new school by hosting a student.

The family maintained its relationship with Global Outreach when moving to the Fox Valley three years ago. In recent years, Mark and his wife, Gail, have supported the program through fund-raising with plans to host another student when Natalie, their youngest daughter, was a junior.

“This is something good for Lucie, but good for Natalie as well,” said Mark. “Sharing and being open to somebody else is really important. Opening your home and trying to be hospitable are incredibly important values.”

The experience is much different than when the family hosted Laurinavicius, who made a recent visit, said Natalie.

“I was kind of a little brat with Andrius,” she said. “I would tease him and he didn’t have any siblings so he wasn’t used to that. Soon he came back at me and we became really close. He was like my older brother. Now it’s cool. I have a better understanding of where Lucie comes from. I feel that it’s a more cultural experience this time. I’ve gotten to know her more and we’ve become closer.”

There have been some adjustments, she added.

“Lucie is very easy to get along with, so she has adjusted in the house very well,” said Mark. “We’ve been keeping her moving since she arrived.”

The family has taken Lucie to Colorado, San Diego and Mexico. She has also participated in March for Life in Washington, D.C., and the National Catholic Youth Conference in Kansas City.

“I was most happy that Lucie was able to go to NCYC,” said Mark. “We had a group go from St. Mary’s and the diocese. She was able to see some of her friends from the Global Outreach program that are at the other Catholic high schools and that was a good experience. She was part of the 100 or so from the diocese at March for Life and was able to see more of the country, but also in a Catholic context.”

Lucie has been active at school. She is involved in choir and drama, plays soccer and was a member of the tennis team in the fall. Her top sport in the Czech Republic is handball.

She has also grown in her faith this year. She said that she enjoys how personal Mass is at St. Margaret Mary Church in Neenah.

“I like the priest (Fr. Mike Ingold),” she said. “He has a microphone and he is talking all around the church and walking, asking people questions. There is also nice singing, normal songs that you can sing.”

“I always liked that Global Outreach is a Catholic program,” said Mark. “Andrius came from a very reverent family. It was interesting to see his example of faith for my son. He would talk about the faith. He is a philosophy graduate student in Vilnius. He always had a theological mind and was always asking questions. I really enjoyed that aspect of it. What has really interested me is hearing Lucie and Andrius talk about how different the practice of the religion is in their countries.”

“We have five students from St. Mary’s going to the summer camp,” said Mark. “Lucie was the new student last summer and the older students, those who were here at St. Mary’s and other schools, pass the baton on. This year, she will pass the baton on to the next class.”