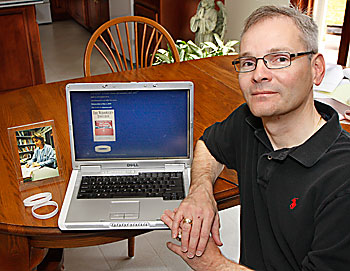 Gerald Schaefer, pictured at his home next to a photo of his late wife Terri, has written a book for men who have recently lost their wives. “The Widower’s Tookbox” offers information to help men cope with the loss of their spouse. (Photo by Rick Evans | For The Compass)

Terri was well known in several communities of the diocese where she served as an elementary school teacher at Holy Rosary in Kewaunee, St. Mary’s in Bear Creek and St. Jude in Green Bay. She completed her career in the Green Bay public schools, working at Webster School and at Baird School. “She was a great teacher,” said Schaefer. The word he used several times to describe his wife was “caregiver.”

He described the cancer that took his wife as “a journey of hell.”

They thought they had beaten it and then came the car accident. Her leg was bothering her and she thought it was from the accident. Instead they learned that after some clean check-ups, the cancer had returned, this time to her bones. That was in early 2004. “Then everything changed,” said Schaefer.

From those experiences over a four-year period and the aftermath of coping with his loss came the book, “The Widower’s Toolbox.” Men find themselves often grieving alone, said Schaefer. The first month everyone comes around; by the second month the man is on his own. The social networking women have seems to provide them with easier access to support, he said. “Men never, never ask for help,” he said.

Yet somehow Schaefer said he found himself, six months after Terri’s death, being asked to talk with another man who was dealing with the terminal illness of his wife. There were so many things they hadn’t talked about, the man told Schaefer. “I basically had to shake him up. ‘You’re starting to run out of time,'” he remembered saying.

That experience and similar stories are the reason the book was written. But the heart of “The Widower’s Toolbox” is the journaling Terri and he did upon learning that cancer had returned to their lives. “It was too hard to talk,” Schaefer said. So he remembered what they had learned at a Marriage Encounter weekend years before, that journaling is a good way to communicate. He remembers initially being insulted when someone invited them to Marriage Encounter, thinking they were implying that he and Terri had a problem in their marriage. He recalled being surprised when Terri told him, “‘I think we should do it.'”

“Marriage Encounter taught me how to write love letters to her,” he said.

And so he went to Barnes and Noble one day and purchased two leather-bound journals.

He gave her the journal before leaving for work one morning and told Terri of his idea, to write about all the things that were so hard to say: their feelings about the cancer, their hopes for the children, even questions as difficult as how Terri would feel about her husband one day remarrying.

“Every chapter has a story about the experiences that we had,” he said. It also features stories of many other men he interviewed. Schaefer tears up as he talks about one man who he said put it so well: “‘She was the glue.’ … That’s the greatest quote in the book,” he said.

The book, published by New Horizons, is priced at $14.95 and features 244 pages with 41 chapters. It’s divided into three parts. Part one speaks to “righting the ship” and getting back to basics, “just repairing your life,” said Schaefer. Things as simple as grocery shopping and doing the laundry may be tasks a man has never taken on, he said.

Part two speaks to beginning that slow, difficult move into the future. How do you become a nurturing parent when before there were two of you in that role? How do you cope when even the most mundane task of folding the laundry brings you to tears? What about depression? “You can’t schedule grief,” said Schaefer.

Part three continues that move into the future. How do you look toward the future without your spouse? Men, he said, “feel the need to be useful.” Doing things is how men give back to others, he said. The questions of dating and remarrying, even the idea of getting a pet, are some of the life-changing topics discussed. “I think you’re always a widower,” said Schaefer, even if you remarry. There are always going to be the questions of “what could have been,” he said.

“I still love her tremendously,” Schaefer said. But he compares the love he has for his two unique sons to what widowers experience as they enter the world of new relationships. “I love them equally, as wide and as deep as love goes, but I love them differently,” he said.

“Here’s my belief,” said Schaefer. “I think God gives everyone miracles.” He just wants widowers to know, “They will really get better, that they can do this but it’s just one day at a time.”

“The Widower’s Toolbox” is available at www.Amazon.com and www.Barnesand Noble.com as well as other online outlets. It will also be available locally at Barnes and Noble and at the Reader’s Loft in Green Bay.

More information can be found at Schaefer’s Web site www.WidowersToolbox.com. There you can also find information about the remembrance bracelets he has available for purchase. One side says “A Time to Mourn,” the other “A Time to Heal.”

He hopes the book is not only useful to widowers but those who help widowers during the healing process, such as funeral home directors and parish leadership, even friends.

What does he want other people to know about widowers? “That they’re not as tough as they seem to be,” said Schaefer.