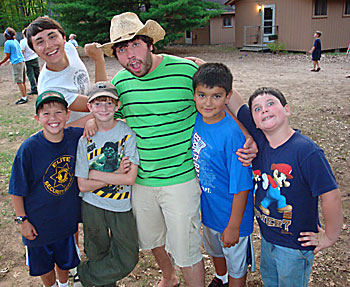 “You are not allowed to bring gum there and they don’t sell gum there, so where does it come from?” he said. “I don’t get it.”

Vander Loop, a member of St. Philip the Apostle Parish in Green Bay, where he is an altar server, said he is excited to take part in this summer’s Survivor — Osprey Island week at Camp Tekawitha. His brother Grant, 8, will join him for his first camp experience. Other 2010 themes are: Hogwarts — The Summer Camp, Winter Olympics, Westward Ho!!, Rock and Roll Camp, Lights! Campfire! Action!, and CLUE — Camp Tekawitha Edition.

“The theme helps to define the week, but everything is not theme-related,” said Eric Blumreich, camp director. “Each week we will have an opening ceremony. We will integrate the theme into a portion of every day.”

For example, the movie-themed camp will close with an academy awards type ceremony, said Blumreich. Core values are a focus at all the camps, he added.

“Camp is about leadership development, building relationships, and deepening Catholic faith by experiencing things in a fun, natural environment,” he said. “The themes are an add-on.”

Camp Tekawitha, located on Loon Lake in Shawano County, is a ministry of the Diocese of Green Bay. It opened in 1926 as a Catholic girls camp. Major renovations were made in 2002. Camp Tekawitha is available for year-round use. A partnership with Spiritus and Mount Tabor Center of Menasha was developed to offer retreats throughout the year. The camp is also now accredited by the American Camp Association.

“What that means is we’ve had outside camp experts come in and look at everything we do from our camp program to a special focus on safety issues,” said Blumreich.

Camp Tekawitha is a Catholic camp, but is open to youth of all faiths. Mass is celebrated on Wednesdays. The faith element is incorporated both formally and informally, said Blumreich. 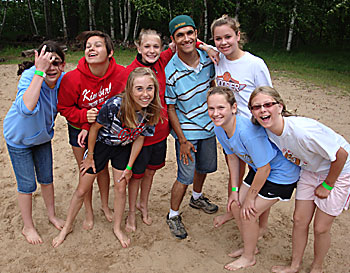 “We have a daily activity called rock and religion,” said Blumreich. “Staff share stories of their own faith, stories of their experience in the Catholic Church. Faith is also reinforced in every activity that we do, any new skill that we learn. When we experience the beauty of nature, when we make new friends, we try to keep in mind that we are able to do this because of the grace of God.”

“I love the fact that it’s faith-filled,” said Sheila Vander Loop, mother of Austin and Grant. “Every morning they start with prayer. I like that it’s youth-based. The counselors in training are typically children that have been brought up through the program.”

The counselor in training program, scheduled for July 18-30, is a leadership development offering for young people, ages 15 to 17, who have an interest in working at camp in the future.

A new Lil’ Tek Getaway program is being introduced this summer. Campers who are unsure about spending a week away from home may arrive on Sunday and leave on Tuesday.

Other changes include a new gazebo near the waterfront, which will headquarter the nature program. The gazebo was built as an Eagle Scout project by Zak Mittlestadt. One of the cabins is being converted into an arts and craft lodge, and a sailing program will be incorporated into the Survivor and Olympics camps.

This summer marks a second go-round at Survivor for Austin. The brothers have the week marked on the calendar and are already plotting their bunk strategy.

“I really want to do the log roll,” said Grant. “It’s a good place to make friends, and I want to learn more about religion.”

“I thought it was really fun,” said Austin. “I really liked archery.”

He also enjoyed the faith lessons. He recalled a Bible story that was explained to the campers by using the “The Lion King” as an example.

“It’s good to have other kids his age to help correlate and understand religion,” said Paul Vander Loop, the boys’ father. “It helps to know that other kids have beliefs and ideas that are similar to his. Otherwise it’s only coming from mom and dad or when we go to church. A lot of kids at school don’t practice religion, so I’m glad he could spend some time in this great environment.”

Sheila said that she noticed a big change in Austin following his week at camp.

“It was almost like an adult going to a retreat,” she said. “He seemed to grow up and become more mature over that week from being apart from us. It really made us bond when he came back.”

“Cost should not prevent any child from coming to camp,” he said. “We have a very easy financial assistance request process. You just need to fill one out and we will work together.”

Registration is open. Blumreich said that those interested should register soon to make sure they get the camp of their choice. He has a guarantee for all campers.

To register or for more information, visit www.camptekawitha.org.