Bender’s love for Mary expressed in her art 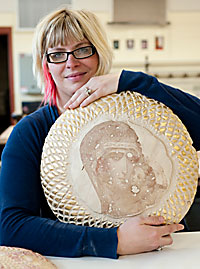 Kathryn Bender, a senior at UW-Oshkosh majoring in art, displays one of her wall sculptures dedicated to Mary. A collection of her art will be on display June 2-4 at the UW-Oshkosh Annex Gallery. (Kasi Koshollek | For The Compass)

The exhibit, reflecting images of Mary, was inspired by a trip Bender took to study at the Spanish Institute in Merida, Mexico. It was during this trip, Bender says, “God really got me.”

Bender left the Catholic Church while in high school because she had questions no one could answer. While in college, she became intellectually intrigued by the argument for God, philosophy and the way faith and God have been so beautifully depicted through the history of art.

While studying in Mexico, Bender began experiencing a more personal relationship with God. Although traveling alone, she knew she was going on this trip with God. Bender asked God to reveal himself to her on this trip. She brought a rosary with her, though she didn’t know how to pray it.

One afternoon, she went with her host family to pray the rosary in front of a statue of Mary. There, Bender says, she “met our Blessed Mother.”

God’s call to her to take the trip to Mexico, and the personal experience she had with Mary while traveling, was very significant in Bender’s conversion and the major influence of “21st Century Renaissance: Ave Maria.”

“Before I used to believe in God; now I know God. This is where my life and energy come from,” says Bender, who received the sacrament of confirmation at the Easter Vigil in 2009 at Most Blessed Sacrament Parish in Oshkosh.

Bender chose to depict Mary in her artwork because, to her, nothing is more beautiful. She has always had a desire to use art to reveal the beauty of motherhood, and Mary, she says, is the ultimate in motherly beauty. She believes it’s important for society, especially women, to see a good example of true feminine love, and she hopes her art can help resurrect the notion of feminine beauty and virtue.

“God knew we needed Mary,” Bender says. “That’s why he gave her to us.” Now, Bender wants to use her pieces of art to encourage the community and show there is still goodness in the world — and in art. 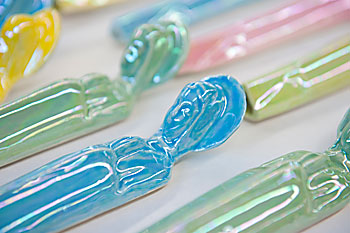 Colorful statuettes of Mary are part of Bender’s exhibit. Money raised from the sale of her art will go to support an orphanage in Mexico run by the Missionaries of Charity. (Kasi Koshollek | For The Compass)

It is important that art reflects the profound truth and goodness of Christianity, stresses Bender. She believes this is what makes art meaningful.

“I would rather see art that connects us, rather than separates us,” she says. Bender feels a responsibility to use her talents as a way to bring people together and convey truth. With this responsibility she attempts to choose goodness, beauty and love, just as Mary did.

Bender believes she has been given her artistic gifts so she may be a vessel for God’s work. Due to this belief, she does not sign her name to any of her artwork. Instead, she stamps each piece with the Spanish words, Te Amo, I love you.

“21st Century Renaissance: Ave Maria” will be on display at the Annex Gallery in the Arts and Communication Building on the UW-Oshkosh campus June 2-4, 2-8 p.m. The artwork will be on sale throughout the exhibit and a closing reception and auction will be held on Saturday, June 5, from 7 to 9 p.m. All proceeds go to benefit an orphanage of the Missionaries of Charity in Tijuana, Mexico, where Bender will be serving after her graduation from UW-Oshkosh.