Couple reaches out to help others 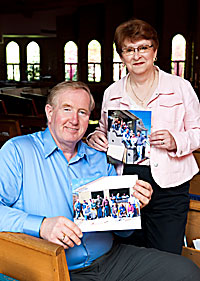 Tom and Maureen Donovan (Photo by Kasi Koshollek | For The Compass)

But he did when he unexpectedly was offered a “phenomenal opportunity” to serve in a position within the diocese. He now is business administrator for St. Jude the Apostle and Most Blessed Sacrament parishes.

“The diocese is a great place to work,” said Tom, who was diocesan consultant for Stewardship, Respect Life and Parish Planning from 2003-2007.

Similarly, a year after she retired, Maureen was called to serve a quarter-time position as outreach coordinator at St. Raphael. She helps agencies in the area — such as St. Vincent de Paul and the Hunger Task Force of South Winnebago County — to provide assistance to people seeking help.

In 1998, St. Raphael’s initiated its first international mission, and the Donovans were intrigued.

“We lightly said, ‘We can do that,'” Tom said. “We did it as a couple just to do something different. We didn’t realize at that time what an impact it would have on our lives.”

One or both of the Donovans have been to Arkansas about eight times through Glenmary Home Missioners, helping rural Catholic parishes build up until they can become a part of their local dioceses. They helped first at Holy Spirit Parish in Hamburg, Ark., then at St. Jude Thaddeus Parish in Waldron, Ark.

There have been two trips to the Dominican Republic and a trip to New Orleans to help families rebuild their homes after the destruction of Hurricane Katrina.

For instance, he said, St. Raphael has organized several coat drives to help the parishes in Arkansas. They have collected more than 1,000 coats for men, women and children and transported them to Arkansas.

“This is where we get into small issues,” he said. “The issue is: people need coats.”

They also helped tile the parish hall, and members of St. Raphael could participate by buying a single tile for the project.

When the previous leader of St. Raphael’s mission work left the position, the Donovans stepped in as mission team leaders.

“It’s something we do together,” Tom said. “I see the big picture, she does all the details.”

“We complement each other,” Maureen said. “It’s a neat thing to do for a married couple outside of our daily work. Both of us are facilitators, which means, ‘to make easy.’ We try to make it easy for other people in our parish to be missionaries and just concentrate on their mission work.”

Both Donovans say the real impact of their mission work is with the personal relationships they have formed. They said they have remained friends with many of the people who formed the original mission team at St. Raphael and enjoy getting together and travelling together. They also like to meet the people in the areas that they serve and focus on their individual needs as human beings.

“We just work with the people,” Tom said. “We don’t get involved with the issues. Going out marching politically is not our gift. We’re not politically naive, but we are not activists.”

They plan a return trip in February to help rebuild more homes, and already there is great interest from potential volunteers.

The Donovans also are the mission trip leaders for a planned trip to the Dominican Republic in October, and they are seeking 10 to 15 skilled medical and dental volunteers for that trip.

Each volunteer pays his or her own expenses for a trip, and many have found unique ways of financing those trips, the Donovans said.

The couple said they like to do outreach mission work because there already are so many helping projects going on in the local community. They said St. Raphael’s has more than 90 parish ministries, and Maureen said interested volunteers can get involved on their own with established organizations like St. Vincent de Paul, Habitat for Humanity and Father Carr’s Place 2B.

Reaching out to others beyond their immediate area holds their interest. But most of all, Tom said, they do the mission work because they enjoy it.