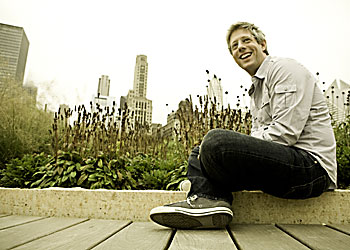 Matt Maher, pictured in a publicity photo, will perform a benefit concert for Catholic Youth Expeditions May 15 at St. Pius X Church in Appleton. The concert kicks off another summer for the diocesan youth and young adult ministry program. (Photo courtesy of matt maher | For The Compass)

Since taking to the road, Maher has performed in concerts and events all over the world, including the National Catholic Youth Conference (Atlanta), World Youth Day (Sydney, Australia) and the March for Life youth rally and Mass (Washington, D.C.).

“Today’s Christian culture is all about event-based Christianity,” Maher says, reflecting on the many youth events he has witnessed over the years. And yet, he notes, this type of extraneous spirituality can only bring them so far. “There is still a disconnect happening. … Seeing young people with their hands in the air listening to praise and worship music … they’re not really meditating on the message.”

What today’s youth hunger for is something authentic, something that is found in the oldest and deepest practices of the church, he said.

Catholic youth “have a strong eucharistic identity,” says Maher. “If you brought in the Blessed Sacrament their posture would change and they’d instantly recognize what is in front of them.” The things that attract young people — tradition, history, lives of the saints, liturgical prayer — are the things that have always been a part of Catholicism.

It’s appropriate, then, that Catholic Youth Expeditions’ theme song for 2010 is the title track off Maher’s new album, “Alive Again” (Essential Records), which speaks of an awakening to the realization of God’s real presence in our lives. The ultimate mission of CYE, an intimate encounter with Christ, is accomplished in each expedition not only through song, fellowship and testimony, but with the interweaving of timeless Catholic traditions — Liturgy of the Hours, reconciliation, eucharistic adoration, and Mass.

In today’s “New Evangelization,” the ancient and the modern go hand-in-hand. And music, says Fr. Quinn Mann, founder of CYE and assistant vocation director for the Diocese of Green Bay, “is a beautiful way to reach the hearts of young people.”

Maher’s May 15 concert will be the third annual benefit for CYE. In 2009, Fr. Mann invited Canadian singer Janelle Reinhart to perform. In 2008, Chicago native Mike Mangione took the stage. All of the previous CYE expeditions have included music in one way or another, and this summer Fr. Mann is striving to utilize even more multimedia in his evangelization.

“Right now we are trying to create a theater called Club Genesius, named for St. Genesius of Rome, the patron saint of theaters. We’re really developing our evening program,” Fr. Mann explains. “Club Genesius is the platform where we use music as a means to draw (young people) in.” The space will be used for skits, dramas, testimonies and music events.

Lil’ Mike (Bostone), a local Catholic rap artist who performed during one of last year’s summer youth expeditions, will join the full-time staff for the 2010 season. “Music has a powerful impact on the lives of the people,” Fr. Mann explains. And using music to reach young people is part of the ministry. “I introduced the Xavier football team to (Lil’ Mike’s) music. … Instead of listening to music that promotes the culture of death, they were listening to Catholic music … and they liked it!”

Also in the development stages is Sheen Studios (named for the late Archbishop Fulton Sheen), which will serve as a media outlet for CYE. This is where a dedicated few staff members will produce promotional materials as well as the picture, video and music montage DVDs which are mailed to participants along with affirmation letters after each expedition.

The relationship between faith and culture is symbiotic. “Our Catholic faith forms artistic creativity,” Fr. Mann said. “Flannery O’Connor said you don’t join the Catholic Church, you become Catholic. In becoming Catholic, in being rooted in a Catholic worldview, it necessarily overflows into someone’s artistic work. And that is how culture is built.”

For Matt Maher, that sentiment seems to ring true. When asked about being identified as a uniquely Catholic artist, he noted, “I’m just being me. I’m writing about what I know.”

Maher doesn’t see the need to distinguish himself as Catholic in his profession any more than others would in theirs. “Bob Costas, the sports commentator, is Catholic. A lot of athletes are Catholic. Are they Catholic football players? Catholic baseball players? Is that what we really want?”

“Prior to evangelical Christianity becoming a driving force in the culture (in the mid-’80s), you were just a musician,” said Maher. “Why is it that a church that is 2,000 years old, all of a sudden (finding) itself in a sub-genre created by the record companies … to get Protestants to go to church?”

Maher insists that his music is not exclusive. “God loves the church,” he says, “but God loves everybody.” And the audience seems to be growing.

On April 21, Fr. Mann was sitting in the audience of the Grand Ole Opry for the 41st annual Gospel Music Awards. He was joined by Fr. Tom Farrell of St. Pius Parish in Appleton and Peggy Duemling, women’s formation advisor for Catholic Young Expeditions. The trio attended in support of Maher, who was nominated for six awards as both singer and songwriter, including his contribution to Chris Tomlin’s Song of the Year nominee, “I Will Rise.”

Fr. Mann was able to speak with Maher briefly after the show. “For a Catholic artist it was a pretty neat distinction,” Fr. Mann explained. “I thanked him for his work and wanted to let him know that the Catholic Church supports him. He was very appreciative, very surprised.”

Despite not winning, Maher showed no disappointment. “It’s encouraging to be nominated among peers.” Yet in the scheme of things, he explained, “it’s honestly really not that big of a deal.” The awards, Maher noted, are “just recognizing something that’s been given to us by God. He deserves the accolades … that being said it’s good to celebrate that…”

Regardless of his success, Maher is not likely to lose sight of what is important. “I think real ministry at the end of the day is relationship. The people you live with day to day … living out the word of the Gospel.”

This relationship is reciprocal for Maher. For those who wish to support him or any other artist, he has this advice: “If you listen to someone’s music and you loved it and you didn’t pay for it, you should find another way to support them. Get the word out. Be an advocate. Above all else, pray.”