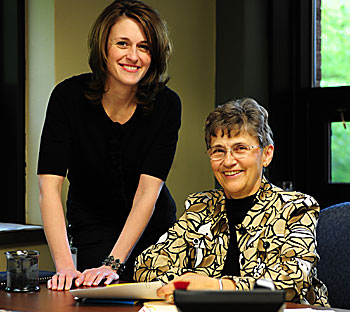 The program also reaches out to survivors of sexual abuse.

The diocese’s Safe Environment Department was established two years after the U.S. bishops approved the Charter for the Protection of Children and Young People in 2002. The charter was created in response to incidents of clergy sexual abuse that occurred in the United States.

Much of the ground work for the Safe Environment Department, however, was completed initially by the Department of Education and the Office of the Chancellor beginning in 2002.

“In that charter, there was the mandate that every diocese provide some sort of safe environment training for adults,” said Fox. The Department of Education was responsible for starting a training program for employees and volunteers. They chose one of the first programs of its kind: Protecting God’s Children Adult Awareness Training, created by Virtus.

Virtus, which consists of several programs to assist churches to be safe havens for children, was established in 1998 by the National Catholic Risk Retention Group. Known as National Catholic, the group helps its 66 member archdioceses and dioceses finance and manage liability risks.

• Know the warning signs of a perpetrator;

• Be aware of what is happening with children and at-risk individuals;

In its infancy, the Virtus training program was presented by a handful of diocesan volunteers. Today there are 112 facilitators — including six Spanish speakers — leading training sessions across the diocese. “We have individuals trained to present Virtus in their home parishes and schools so that not everyone has to come to the diocesan campus in Green Bay to receive training,” said Bass.

Since 2003, 22,380 people have attended a Virtus training session. The sessions run three to three and one-half hours and include handouts, small- and large-group discussions and two videos running 25 and 40 minutes. New employees and volunteers register for sessions online. They are free and open to anyone, including parents and people of all religious denominations, said Fox. “Our department is budgeted to cover the entire cost of the program. There is no cost to the individual and we do not charge the parishes.”

All clergy as well as employees or volunteers in leadership positions are also required to continue their education by reading monthly Virtus continuing education bulletins online. In addition, Virtus facilitators are commissioned and asked for an initial commitment of three years and are required to read a special monthly facilitator bulletin.

“We are now on the fourth revision” of the Protecting God’s Children program, said Fox. “Now the program includes social networking, Internet safety and cell phone use. It also brings in the idea that safety applies to individuals at risk, which has always been part of our policy, but not part of the charter.”

Materials also cover how adults can prevent themselves from being falsely accused of abuse, said Fox, such as having two adults present in the company of children.

In addition to the Virtus training program, the Safe Environment policy requires all employees and those volunteers who work with children or individuals at risk to undergo criminal background checks and sign a form agreeing to follow a code of conduct. Since much of the paperwork is on the parish level, local safe environment coordinator (called LoSEC) positions were created and charged with ensuring that safe environment policies are being followed. Today there are 169 LoSECS in the diocese. They include parish staff members and volunteers who express an interest in the program and are willing to take on another responsibility.

Another component of the Safe Environment Program is training sessions for children enrolled in Catholic schools and religious education programs.

“Every child is required to receive some safe environment training throughout the year,” said Bass. Each year since 2004, thousands of children — including 33,012 students in 2009 — receive training using materials following curriculum standards outlined by the Department of Education. The Safe Environment curriculum is reviewed regularly.

St. Norbert College works with the Safe Environment Department to provide safe environment training and background checks for college students who accept student teaching positions at local schools. “The college has now taken the initiative to get those students trained within their own program using our Virtus training,” said Fox.

Whenever abuse is suspected, the individual who suspects the abuse needs to contact the appropriate authorities within their county. They may also contact the diocese.

“What we tell them in the program, is if they suspect (an incident), they need to be the ones to contact a department of child and family services, depending on what county they live in,” said Fox.

“They can generally go to the counselor of their choice if the counselor has the appropriate training or we will recommend counselors,” she said. “We always encourage victims who come forward to report to the district attorney of the county where the event occurred. We, as mandated reporters, always report any incident. … Of the allegations we’ve received, most occurred in the ’60s and ’70s.”

According to Fox, some victims come forward only to report past abuse.

“They really don’t want anything from us other than to make us aware that an incident happened,” she said. “Many times they say they are reporting so that no one else will be abused.”

She said one of the most rewarding parts of her job is when survivors of sexual abuse come forward and are willing to share their experience. “That’s not only with those directly abused, but it sometimes can be a family member,” she said. “To be in that position (is a) privilege.”

Measuring success of the Safe Environment Program is not easy, but Fox and Bass point to a few results. One is the program’s acceptance by employees and volunteers throughout the diocese.

“At first, there was anger and confusion about having to fulfill these types of requirements when prior to this you could walk into any parish or school and could volunteer without questions asked,” said Bass. “But now, we don’t get those questions. People accept that this is what you need to do if you’re going to volunteer with children or with individuals at risk.”

Another sign of success is the number of inquiries the department receives from other organizations.

Incidents of clergy sexual abuse that have been reported recently in Europe remind Bass and Fox that while much progress has been made in preventing abuse locally, work must continue throughout the church.

“I think there’s beginning to be a recognition that, though it is or certainly was a crisis, we have done a lot to initiate prevention and safety — as well as outreach,” said Fox.