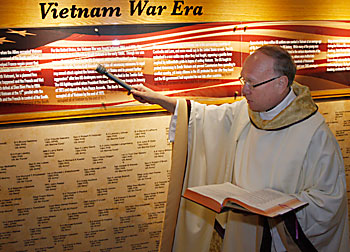 On May 16, Herlik and all veterans in attendance received a hero’s welcome at Notre Dame Academy. A Mass and breakfast were held in honor of all alumni from St. Joseph Academy, St. Norbert High School, Central Catholic High School, Abbot Pennings High School and Premontre High School who served in the military during the Vietnam War era.

Highlighting the event was the dedication of a new “Wall of Honor” at the school. This tribute, located in the first floor hallway connecting the priory with the library and classroom wing, was funded by the Nobel-Straubel Veterans of Foreign Wars Post 2037. It includes 237 names and a brief account of the war.

“It means a lot,” said Herlik, a 1951 graduate of Catholic Central. “It touches my heart to see the wall and to see all the people here.”

Norbertine Fr. Dane Radecki, president of Notre Dame Academy, said that many people believed that the wall dedication was related to LZ (Landing Zone) Lambeau, the May 21-23 welcome home celebration at Lambeau Field, but it was planned without knowledge of the stadium event. Two years ago, the subject of honoring the veterans arose during a conversation between Fr. Radecki and Pat Rank, a 1963 graduate of Abbot Pennings. Rank, who did not serve in the military, said he was motivated to do the tribute because “the veterans wouldn’t do this for themselves.”

“Fr. Dane was really the catalyst,” said Rank. “He put announcements in the alumni newsletters and really got the word out. Kathy Kanikula (communications coordinator at Notre Dame) was so helpful in gathering information. The goal was to get 100 names. We got more than 230 to start and we continue to receive more. My guess is that we will soon have around 300. This project is not finished. It’s an ongoing thing. We will keep adding to the wall every year.”

Mary Ellen Albers represented her late husband, Tom, at the event. Tom, a 1963 graduate of Abbot Pennings who died in 2004, served with the army in the Vietnam War in 1970-71. When contacted by Rank about the event, Albers said she immediately committed to attending.

“I thought what a wonderful gesture on the part of Pat,” she said. “This was kind of long overdue to show our appreciation. They really did not get any kind of recognition.”

Albers added that she hopes the Wall of Honor serves as an educational tool for current and future Notre Dame students.

“They are distant from that time, but war has been a big part of their lives with Iraq and Afghanistan, so they realize the importance of honoring those who serve,” she said. “They don’t realize what it was like back then. The soldiers were very afraid to wear their uniforms coming home from their tour of duty. No matter what we feel about the war, we have to appreciate the service these men and women have done for our country.”

Herlik, an airman who gave 30 years of military service, was among the speakers at the breakfast. He shared his account from his second tour when his plane was shot down near the border of Cambodia and South Vietnam. Herlik, his co-pilot and two Enlisted Men-5s (sergeants) were held in a Cambodian naval barracks for nearly a month before being released to the Australian Embassy. Herlik, who grew up in the Annunciation Church neighborhood in Green Bay, credits his alma maters for his leadership skills.

“I had a ball in high school and college and learned so much,” he said. “I was the captain of all three teams, bowling, rifle and golf. Catholic Central and St. Norbert College prepared me well. I’m thankful for the faith I had in God and country when I served in Vietnam.”

Herlik, who now lives in Augusta, Ga., encouraged other veterans to share their stories with young people.

“It’s too easy to distort what happened over there,” he said. “I hope they call some Vietnam vets to come into the schools to talk once in awhile. I give talks as much as possible.”

Fr. Radecki offered a special blessing for the veterans at the Mass.

“Today we give you our prayer and thanks,” he said. “We recognize that many alums were part of the military during that time in our country’s history. We’ve invited you to come back not to forget, but to remember.”