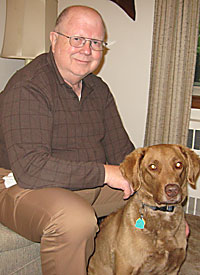 Fr. Robert Karuhn, who is retiring from active ministry this month, is pictured with his dog Willy. Ordained May 29, 1965, he has served as pastor of Sacred Heart Parish in Appleton for the past 11 years. (Photo by Amanda Lauer | For The Compass)

Becoming a priest wasn’t the life path Fr. Karuhn thought he was going to take. He only went to Catholic school for one year because his family — father Fred, mother Margaret, and a younger brother — moved from New London to Coleman when he was in second grade. After graduating from Coleman High School, he started college at Oshkosh State (now UW-Oshkosh) with the goal of obtaining a secondary education degree.

“That summer as I prepared to go back to Oshkosh, it was almost like God said, ‘How long are you going to fight this? When are you going to give in?'” he said. “I talked to my pastor and the rest is history. Instead of going back to Oshkosh I went to Sacred Heart Minor Seminary in Oneida. I did two years of college at the minor seminary and two years of college at the major seminary, St. Francis in Milwaukee.”

Fr. Karuhn’s mother was very supportive of his decision to become a priest. It took a few weeks for his father, who was a Missouri Synod Lutheran at the time, to come around. “After he got used to the idea he became very supportive and kind of proud that I made that decision,” he noted.

After his ordination on May 29, 1965, the majority of Fr. Karuhn’s assignments were in northeast Wisconsin. He started as an assistant pastor at Resurrection Parish in Allouez. After five years there he spent a year-and-a-half working at Shalom Center, a halfway house for men leaving prison, and People’s Drug Abuse Center, both in Green Bay. He helped with Masses on the weekends at St. Matthew Parish in Allouez.

“Then I became pastor at St. Edward and Isidore in Flintville. I was there four or five years. From there I was at St. Patrick’s in Green Bay for less than a year.” Fr. Karuhn then served at St. John Parish, Coleman, St. Wenceslaus, Klondike, and St. Leo Parish, Pound. Other parish assignments included St. Peter in Oconto, St. Joseph in Wautoma and St. Joseph in Sturgeon Bay. He has been at Sacred Heart for 11 years.

Every parish Fr. Karuhn worked at had a unique spirit. “They’re all different. The biggest challenge is to minister equally to the more conservative and more liberal Catholics. Because you are pastor to all, like St. Paul said, he’s all things to all men.”

Being a priest has its ups and downs just like any career. “One of the better memories for me was building a new church in Flintville. That was awesome. The two years that I worked at Shalom and People’s Drug Abuse Center were enriching for me,” said Fr. Karuhn. “Coleman and Pound were probably the most challenging because they were one of the first in the process of linking. They had to build a church and determining what site was difficult.”

Retirement to his home in Oconto will be an adjustment for Fr. Karuhn. “There’s nothing demanding your time except what you make for yourself. That will be a challenge because your life is busy and all of a sudden it comes to a standstill. I hope to get involved in the jail ministry in Oconto. I’ll be helping out in parishes in the northern area.” He also plans to keep busy taking care of his lawn and garden and getting together with friends to play cards.

Fr. Karuhn hopes he has made an impact on all the parishioners he’s ministered to through the years. “I would hope they have been challenged and encouraged to grow in their relationship with Christ. I would hope that there has been spiritual growth for most.”