Scout puts cemetery on the map 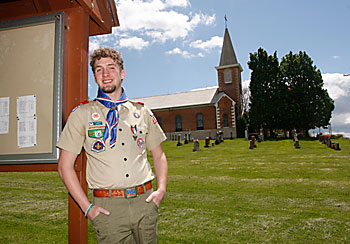 Matt Christoff (Photo by Rick Evans | For The Compass)

The idea came about when working on his genealogy merit badge, he said.

“My grandmother and I had to go through cemeteries to trace my family line back. It’s really hard when there isn’t a map because you have to spend hours at a time walking through the cemetery trying to find one name of someone who might be there.”

He felt the cemetery directory “would be a perfect way to help remember the people of our parish.”

“It would be awesome for people who do genealogy, especially for the historical societies in Door and Kewaunee counties,” he said. “There are a lot of people buried in this cemetery who are the roots of towns like Dyckesville, Duvall and Luxemburg.”

Fortunately, because of the work of Christoff’s grandmother, Joyce Lampereur, the archivist and historian at St. Louis Parish, burial records were available. The earliest records date back to 1867. Christoff submitted his idea to Dominican Sr. Marlene Dimmerling, parish director, who supported the project. Christoff, a member of Troop 1042 of Luxemburg, then presented a write-up on the project for approval by the Bay Lakes Council.

The Eagle Scout candidate is not supposed to do the physical labor on the project, but rather organize work crews, lead the construction and collect material and monetary donations to support the effort.

Christoff credits his parents, Jim and Nancy Christoff; his grandmother, who is currently writing a book on Red River, Wis.; his grandfather, James Lampereur, who is skilled in carpentry; his troop for serving on the work crew; Keith Tielens of Tielens Construction, who helped with the design and donated a large amount of the wood; and Sr. Marlene for making the project successful. The parish played an important role, he said.

“Sr. Marlene would make announcements about donating money because in the end parishioners were going to benefit from this,” said Christoff, a member of this year’s graduating class at Luxemburg-Casco High School. “Our parish is very generous. I got a lot of help from them.”

A special donation stands out. Benches were constructed for each map shelter, located on opposite ends of the cemetery. One of the benches features a plaque that reads “In Memory of Deacon Dave English.” Three years ago, Deacon English died in a boating accident.

“His wife and his children still live here,” said Christoff. “I gave her a call about what I was doing. She sent me a check for $200 and shared a touching story about how she always idolized (Deacon Dave’s) need for service, which is a really big part of Boy Scouts, and everything the church stands for is service for other people. It was very inspiring and it touched me. It was a really meaningful donation.”

In the fall, Christoff will attend St. Norbert College in De Pere to study music. He sings and plays the piano, and has been active in the parish as a choir member and song leader. He also volunteers at parish dinners with his family and is a former altar server.

The cemetery project was completed in May of 2009. Approximately two months later, while working at Bear Paw Scout Camp in Mountain, Christoff was informed that he received the Eagle Scout honor. A ceremony was held in October of 2009 in the church hall. Christoff continues to be involved with Scouting with Troop 1042. Being an Eagle Scout is an extension of the values instilled by his faith and family, he said.

“I have standards that I need to uphold even though I’m not a youth in Boy Scouts anymore,” he said. “I need to stay true to those values, the 12 points of the Scout Law and the Scout Oath. I need to try to be a good person who God would smile upon as a role model for future generations, especially younger Scouts.”

Christoff will continue to update the cemetery maps with the help of his family. While he anticipates being busy with his education, his connection to his home parish will remain important, he said.

“I went to the Catholic school when it was here,” he said. “I was a member of the last class to go the entire way from pre-school. The parish has meant a lot to me. I feel that you really need to share your gifts that God gave you with other people.”