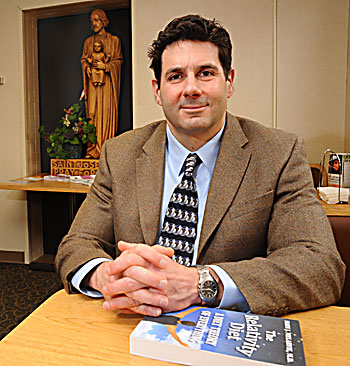 Dr. Shaun Melarvie is author of “The Relativity Diet: A Diet Theory of Everything.” Melarvie said a lot of his inspiration for the book came while attending Mass. (Sam Lucero | The Compass)

At the time, Melarvie did not know what caused the condition. Today he believes it was due to his obesity.

The episode started Melarvie on a journey to control his weight, eventually leading to a book he self-published last January titled, “The Relativity Diet: A Diet Theory of Everything.”

It was during his residency that Melarvie began gaining weight.

“I was at the hospital all of the time and the cafeteria was always open, so I probably gained 50 or 60 pounds during my residency program,” he said, noting that he topped out at around 305 pounds. “Then I remained persistently obese up until I figured it out.”

He calls it his enlightenment, which he describes in his book.

Following heart surgery, Melarvie began dieting and exercising. He even started racing in triathlons. But the yo-yo effect of losing and gaining more weight left him frustrated.

So Melarvie, a member of Corpus Christi Parish in Sturgeon Bay, took a new approach to his weight loss challenge — a scientific approach. He began reading and researching information about the science of nutrition and weight loss.

“From that moment I educated myself and learned things that I wasn’t aware of before,” he said.

“I read about 10,000 pages of science books trying to come up with an answer” to peoples’ questions about how he successfully lost and kept off extra weight.

The answer was the foundation of his book, which he calls DTOE, a Diet Theory of Everything.

DTOE “is in reference to the holy grail of physics: the theory of everything,” he explained in his book. The theory melds classical physics like Einstein’s theory of relativity with modern physics of quantum theory.

For several years, Melarvie immersed himself in scientific literature. “While I was reading about quantum physics … and Einstein’s equation, I found myself becoming more spiritual,” he said. In learning about the fundamental forces of the universe, “I couldn’t see how there could not be a supreme being. Through this three-year process (of research) I found myself becoming more spiritual than less.”

In his book, which is as much an autobiography as a self-help guide, Melarvie uses spiritual references to make points.

“When I wrote the book, I wasn’t trying to be spiritual,” he said. “The Christian references throughout the book were my flavor on (deductive reasoning). This could be interpreted in a religious manner or a secular manner.”

He said a lot of his inspiration came to him while at Mass.

“The Mass has always been a comfortable, familiar format and for some reason I do some of my best thinking in church,” he told The Compass.

For example, while struggling to compose an outline for his book, Melarvie heard Fr. Tony Birdsall, now retired, give a homily about the Holy Trinity.

“I had all of this information in my mind (for the book) and I was thinking, ‘How am I going to put this all together so it will make sense?'” he said. “I was sitting there and it came to me during Fr. Tony’s in-depth review. I would talk about diet, exercise and a third thing, emotional health. That’s my trinity.”

Melarvie, who now weighs about 220 pounds, said the message he delivers in his book is that people can change their lives for the better, whether it involves losing weight or breaking bad habits.

“I think that for anybody who wants to change their life, whatever it may be, the individual has to hit rock bottom or be ready for a change. They have to want to change,” he said. “If they’ve reached that point, then they can; but they need to take personal responsibility for their actions and their thinking patterns. Then they have to arm themselves with knowledge of the facts and truths that will make that happen.”

He said he gets inspiration from a high school classmate who is now a priest and vicar general for the Diocese of Bismarck, Fr. John Guthrie.

“He said that (imitating Christ) is something you can pray for, but in order to approach Christian perfection, you have to act like Christ; you have to be charitable,” he said. “It’s by acting like Christ that you become more like Christ. It’s something that’s not given to you.