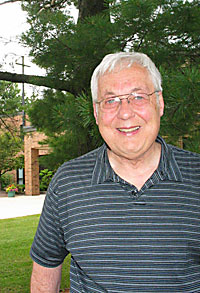 Msgr. Jim Dillenburg stands outside his parish, St. Elizabeth Ann Seton in Green Bay, which he calls “the most beautiful setting for a church, right here in the city.” (Patricia Kasten | The Compass)

As he retires as pastor at St. Elizabeth Ann Seton Parish in Green Bay, where he has served for 14 years, Msgr. Jim said one of the greatest blessings of his priesthood has been seeing the different images of God people hold in their hearts.

“You look at a tree,” he said by comparison. “Head-on, I get one view. Lying on the grass, I get another view. If I’m on the 15th floor and look down at the tree, I get another view. Which is the most accurate image of the tree? It’s the same thing with God. Which is the most accurate image? … God is big enough. He’s got all these different sides.”

His childhood in Casco, watching Lake Michigan car ferries at Kewaunee, sparked his love for seafarers. His call to be a priest also came early; he knew by the third grade.

“When I was a kid and thinking about being a priest, I talked to my pastor, Fr. (Rudolph) Hodik, about being a missionary so that I could travel,” Msgr. Jim said. “He was a great traveler. But he said, ‘No, you don’t want to be a missionary. Be a diocesan priest. Missionaries travel to one place and that’s where they stay. Be a diocesan priest; you can go anywhere you want.’ Well, it was beyond my wildest imaginations where I went.”

Msgr. Jim entered Sacred Heart Seminary in Oneida at age 13. He later attended St. John Seminary in Collegeville, Minn., and was ordained on May 29, 1965.

That fall, he was named as assistant pastor to St. Agnes Parish in Green Bay. In 1969, he became associate pastor and was named as diocesan director of the Apostleship of the Sea (AOS). It had been “a paper job,” but Msgr. Jim’s love of the sea led him to a hands-on ministry.

“I would go down after nine o’clock at night, sometimes till midnight,” he said, “and the guys on the ship who had never met a port chaplain before were pretty impressed. I was really welcomed into their lives and their hearts.”

That chaplaincy led him around the world. He became the first president of the National Congress for Seafarers, then national director of AOS, and finally spent five years in Rome (1991-96) in an AOS position now called general secretariat. In 1996, he received the Star of the Sea Award from National Catholic Council for Seafarers.

Through all of it, he saw many world events, including tanks on the streets of Moscow during the Counter-revolution in the early 1990s.

He’s seen scary and dangerous things in his work with seafarers, and with other itinierant people like gypsies, circus workers and truck drivers. But he never felt scared, he said.

“We all walk into situations and don’t know what awaits us. (For me,) some have been threatening. But when I was feeling inadequate, I asked God to come along with me and because of that I wasn’t so often surprised.”

He has also seen the world of parish life. In 1973, he became pastor at St. John in Seymour, right as they were designing a new church. He compared that process to getting a first chalice at ordination.

When he was named diocesan vocations director in 1984, he also felt privileged.

“I was meeting people in the depths of their hearts and souls,” he said. “I felt such a depth of responsibility to the person and again to the church.”

He calls all his ministry “servant leadership,” and says he is often in awe of the basic holiness of everyday people, like those in his present parish, who are “in the trenches.”

Now as he faces retirement, Msgr. Jim believes it is time for a rest.

“When I came here 14 years ago, I was excited about being in middle of everything,” he said. But now, at 70, he admitted to being tired. “I don’t have the energy, and that’s not good leadership.”

So on July 1, he plans to “turn off his alarm clock.” He’ll move to Kewaunee to live in the small house on a farm owned by his sister and brother-in-law. In preparation, his family threw a shower because, after all the years of travel and parish work, Msgr. Jim didn’t have household items like cookware.

However, he does plan to help out at parishes around the diocese. And he’ll travel too.

“I’ve signed up, through the AOS, as a cruise chaplain,” he said. “One cruise I’d like to make is around the tip of South America and down to Antarctica. That’s a dream. It’s the only continent I haven’t been on yet. So I have to go.”