OSHKOSH — It’s time for parish picnics. So for members of the former Sacred Heart Parish — now part of St. Jude the Apostle Parish — that means it’s time for grophens.

The sweet doughnuts are a legacy of the Highholders, Bohemian immigrants from Germany, Austria and the Czech Republic who settled the city’s southside in the late 1800s. “Highholder” comes from the German for “collecting hay.” Neighborhood women explained their activity in German — hoi-holden — to questioning passersby. 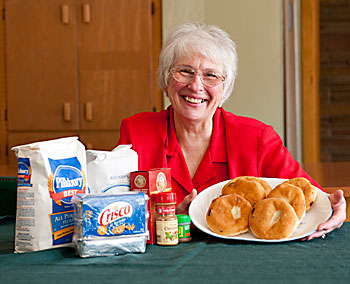 St. Jude the Apostle Parish member Kathy Dodge holds a plate of grophens next to the donated ingredients used for making them. More than 200 dozen grophens are expected to be sold at the upcoming St. Jude Parish Festival June 18-20. (Kasi Koshollek | For The Compass)

Those “highholder” women of Sacred Heart Parish started making grophens for the parish picnic about 1922, and their descendents continue the tradition today. This year’s picnic will be Father’s Day weekend, June 18 through 20.

Around 200 dozen grophens will go on sale at 9 a.m. Saturday, fresh from the oven, at a cost of $6 a dozen. They will probably sell out quickly, said Betty Pischke, who was in charge of the baking for four decades.

“They can’t wait to get them,” she said. “They line up for a block. Now we offer pre-orders. There are tables with just the prepaid doughnuts, and you can walk up and get them. The rest of the customers have to stand in line and wait. Many are eating one of them as they are going out of the building.”

Grophens can be frozen and warmed briefly in the microwave, Pischke said. Because the ingredients and supplies are donated, it’s pure profit for the parish, she said.

Pischke said many people in the close-knit neighborhood recall growing up with homemade grophens. But because fewer people bake today, many now only see them at the annual picnic.

“We were brought up with them,” Pischke said. She recalls often going to her German-speaking grandmother’s house to help her make potato noodles and grophens. The ability to make grophens was a source of pride for girls, she said.

“You bragged about it because not everybody could make them,” she said.

She said her mother’s mother was one of the original volunteers to make grophens for the parish. Pischke later helped her grandmother, and the torch of heading the baking effort eventually passed to her.

“When my grandma made grophens, they were made on the day they made bread,” she said. “You didn’t bake the last loaf. You would pull it (into pieces) and deep-fry those.”

However, when that deep-fried flour dough hardened as soon as it cooled. So while grophens were a tasty treat, they had to be eaten warm — and quickly.

Pischke, who used to bake every day of the week except on Sundays, tinkered around with the recipe, trying to produce a doughnut with a little more staying power. She found one.

“The recipe they use now is the one I perfected,” she said.

While some women were reluctant to deviate from traditional methods, they marveled that Pischke’s doughnuts didn’t harden right away. Pischke’s secret was mashed potatoes, along with eggs, a little sugar and, sometimes, raisins.

“There I was, in my middle 30s,” Pischke said, “trying to teach something to women who had done this for years. We didn’t change the method. We just changed the recipe. Each one was cut the same.”

Another innovation was introduced by Kathy Dodge, who has been in charge of the project for the past few years. The grophens had always been made in the basement kitchen of the adjacent Sacred Heart School. However, the school is now rented out as a daycare facility.

Dodge was working for Schoenberger’s Pastry Shops. Owner Tom Schoenberger Sr. was heavily involved with the parish and offered the bakery’s facilities to make the doughnuts after the regular workday was done.

Bakery work ends about 1 a.m., so seven or eight parish volunteers come in at 1 a.m. on the Saturday morning of the picnic to work until the sale begins at 9 a.m. Tom’s son, Tom Jr., now helps with the work and in “pulling” the grophens.

“Pulling the centers on all these things is a very important (and traditional) part,” Dodge said. “It makes the centers thinner than the rest of the doughnuts. It was their way of getting them fried through the middle. The pulling is the hardest thing.”

After cooking, the grophens are dusted with sugar, nutmeg or cinnamon.

Grophens were an important part of Dodge’s childhood, as well.

“We belonged to the parish when I was in grade school,” she said. “When I was growing up, I used to buy them all the time.”

She lived away from Oshkosh for about 20 years and rejoined the parish when she returned four years ago. Although the grophen job can seem overwhelming, “to me it’s important to have people willing to volunteer,” she said. “We’re doing it for the parish.”

She said grophens continue to be popular because they are nostalgic and are a good-flavored doughnut.

“It’s made with a lot of love,” Dodge said. “Anything made with love is always going to taste good. This is my contribution to make this picnic a success, and I love doing it. You pass it on. You keep it going. It’s paying it forward. It just helps out everybody all the way around.”