Path to priesthood was different for Fr. Dan Viertel 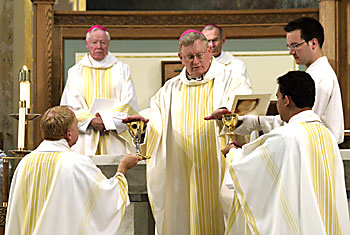 He and his parents, Harold “Bud” and Pat Viertel, were members of All Saints in Berlin. However, he wasn’t strongly connected with his faith, calling himself a onetime “Christer” — one who attends services at Christmas and Easter.

And he was married for 12 years, although the marriage was annulled.

But when he hit a low period after a job loss and divorce, he felt the urge to take a closer look at his life and where he was heading.

“It was God calling my attention to re-evaluate what was important,” he said. “Priestly vocation was not on my radar screen.”

But he feels now that it was on God’s. Step by step, he reconnected with his faith and was led along on his new journey.

“God’s grace helped me through this difficult period,” he said. “His voice could now be heard through the events of life. … My journey was different. There were things that God wanted me to explore, experience and understand. I’m happier now than I’ve ever been before, so I must be in the right spot.”

His life up to that point had been about accumulation, he said. In addition to his work activities, he also served as an emergency medical technician for the city of Berlin, on the police and fire commission and on the Berlin City Council.

“I don’t know how I balanced it all,” he said. “It was always about the money. My life was busy and noisy, chasing the American gospel of success.”

He vowed to place his trust in God and volunteered to begin a choir for older teens for his hometown parish. The youths’ questions led him to seek information about vocations that are available to help get young adults excited about their faith.

He pursued the Commissioned Ministry Leadership Formation Program and then the master of theological studies program at St. Norbert College in De Pere.

As he progressed, circumstances kept falling into place to lead him to pursue a priestly vocation. It didn’t come as easily to his mind. He had many self-doubts and felt unworthy for the role of priest.

“It wasn’t me taking steps but God pulling and calling and putting things in the way of my backing out,” Fr. Viertel said. “My human side was fighting it but my spiritual side was being pulled along, letting God do his work. I had to get out of the way and trust God.”

All the way down to St. Meinrad School of Theology in Indiana, he kept stopping for breaks to try to talk himself out of going. He came to the conclusion that since everything had fallen into place, he needed to at least try.

“God made this all work, so why would I question it now?” he asked himself.

During his first class, he felt completely lost as to what the teacher was trying to convey, and he felt that justified his quitting. But after class, a young fellow student approached and asked, “Did you understand anything that monk just got done saying? Neither did I.”

“OK, I got the message,” said Fr. Viertel. “Anytime I was about the leave, God put somebody in the way. He knew I was worthy.”

He also found a special sign for him on campus. A business he owned in Berlin had a clock tower, and a clock on the St. Meinrad campus had the exact same face.

“Is this a message?” he concluded.

Fr. Viertel’s past ministries include serving at a paraplegic/quadriplegic care center, grief support and developing a music ministry for children. He also received hands-on ministry experience through a summer internship at Nativity of Our Lord Parish, Ashwaubenon.

His most recent parish was St. Mark in Redgranite. He now is assigned as parochial vicar at St. Francis of Assisi in Manitowoc.

Fr. Viertel believes his life experiences are a great asset to him as a priest.

“With my business experience and having travelled, I have a keen awareness of how that affects life. There’s a sense of community and empathy,” he said. “It helps me to understand others. It helps to have a platform to draw from for working with people. It gives a rich homiletic platform.”

He said his ministry feeds off the love and compassion that Christ has for others. He said many people today have lost sight of what is important because of the constant noise of technology and society’s promotion of success. There’s nothing wrong with success, he added, only with how people sometimes get there and what they do with it.

Fr. Viertel added that his vocational story is about listening to God.

“I’m very excited about the ordination. You’re becoming the eyes of Christ, the hands of Christ, the ears of Christ. But it’s truly being called by the people,” he said. “We are afraid of our own mortality today, not hearing or understanding faith as to what is beyond today.

“I can, through the sacraments and liturgy, (help people understand) that it’s our love for God. You are the Eucharist. You are the body of Christ. … Wow! It just doesn’t get any better than that.”