Safe environment training can be an eye opener 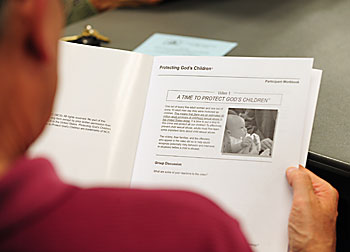 A workshop attendee looks over material at a Safe Environment training session held in Green Bay on May 18. (Sam Lucero | The Compass)

“It’s just disturbing, that’s what it is,” she said at the end of the evening. “But having a workshop on this is good.”

The “Protecting Our Children” workshops include two training videos telling the stories of several abuse victims and two abusers, a workbook, input from facilitators, time for small and large group discussion and forms to be filled out to authorize background checks. The workshops take about three hours and are offered at various sites around the diocese. Parishes and schools in the diocese require all employees and volunteers who work with children to attend training and have background checks. However, parents, grandparents and anyone who intereacts with children or vulnerable adults are encouraged to attend.

Deacon Craig Merrick, a parent and grandparent as well as one of the evening’s facilitators, said that “as many times as I’ve seen the video, it still gives me chills.”

Mary Steel, a St. Thomas More parishioner and a teacher in Neenah public schools, attended the June 1 workshop. “You can’t talk enough about this type of stuff,” she said. “I especially liked the stuff with the abusers. When you listen to the abusers, it’s so much more powerful. We like to think this is Happy Valley. But on the news, we have the teacher accused in Kiel and another in Sturgeon Bay and even a police liaison officer. It’s not somebody else’s problem. It’s right here in our home town.”

The Green Bay Diocese began its Safe Environment training in 2003, using the Virtus program developed by National Catholic Services for the National Catholic Risk Retention Group in Lisle, Ill. Since then, more than 22,400 people have attended a Virtus training session. Local facilitators, of which there are 112 in the diocese, lead the sessions.

One is Irene Skarban, who coordinates child minstry at St. Thomas More.

“When I first had to go to this Virtus training, I was angry,” she said. “I felt it was the priests who had abused and now everybody working in the church was getting their hands slapped. Then, after the workshop, I realized that very few priests had done this and that it was happening across society. … When I heard that, I wasn’t angry anymore.”

Skarban has been trained to lead sessions for those working with vulnerable adults, who are defined as those with physcial, emotional or mental conditions or illness that prevent them from defending themselves or from getting help when injured or abused.

“We do care ministry here,” she said, “and I realized there was a real need.”

She said that abuse of the elderly or those with illnesses happens more than we realize, and can be done by caregivers who include family members.

“You wonder how a child could hurt a parent,” she said, “but you try living with a person with dementia, when you have to change their clothes 10 times a day, and it’s very stressful.”

Carolyn Coutu, who co-coordinates youth ministry at St. Thomas More, was the evening’s third facilitator. She has been leading training for four years and said that what people are often surprised to learn is how often they put themselves at risk of being accused of abuse. This includes times when they are alone with a child, even in such an innocent situation as taking a neighbor child home after school.

“After they learn (the safe environment techniques,” Coutu said, “it becomes a teaching opportunity for the kids. When you say, ‘I would love to take you home but I can’t because you don’t know me that well.'”

There are many other teaching moments during the training session. These raise awareness in a number of situations ranging from playground situations to sporting events to warning signs that a child is being abused to updates on the risks associated with computer use and social networking.

“I’m going to have to become more computer literate,” said Sue Johnson, a grandmother who attended the training session. “My grandchild is way ahead of me on this. She’s been way ahead for years.”

Coutu said that, despite the grim training statistics — that one in 10 boys and one in five girls are abused during childhood — “the majority of people have good intentions and kind hearts, but you need to know the warning signs to protect children.”

• Be aware of what is happening with children and at-risk individuals;

After the videos, Marge Schnese, a volunteer receptionist at St. Mary Parish in Appleton, said that what struck her was “the extent of the devastation this causes in a child’s life. They are so robbed of trust.”

Others, like Charles Fitzgerald, were so stunned that they wondered if the people in the videos — both victims and perpetrators — were actors.

Steel noted how, “it’s hard to show compassion to someone who has done this.” However, as the training also noted, some abusers were themselves abused as children. Statistics on the rates, though, vary widely.

And it starts young. Skarban told of a family member whose 3-year-old and 5-year-old children were abused in a home-run daycare by a 10-year-old. The 10-year-old manipulated the littler ones to take off their clothes. It’s one of the reasons Skarban became a facilitator in safe environment training, to try to help prevent this pain for other families.

Coutu said that the training always raises awareness and helps people face what might be right in front of them.

“One or two people will stop at the end (of sessions) and say that this happened to an aunt of mine or a cousin. That helps me reinforce how imporant this is.”

Deacon Merrick said that this is the entire purpose of Protecting Our Children, “to raise awareness so that we can help our chilren. If you notice something odd, point it out to the person in charge.”