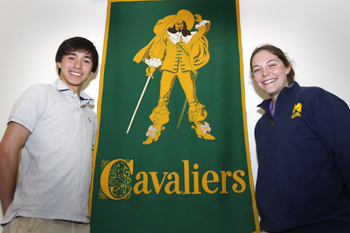 Ryan Tandias and Juliana Molosky were co-valedictorians for the St. Thomas Aquinas Academy class of 2010. Both excelled in academics and athletics at the school and gave their time to serve their church and community. (Rick Evans photo)

Looking at the list of achievements by St. Thomas Aquinas Academy (Marinette) co-valedictorians Ryan Tandias and Juliana Molosky, it’s obvious that they either took Wooden’s advice or didn’t need it. Both pushed themselves to utilize their talents to the best of their abilities over the last four years in academics, athletics, school leadership and service to others.

Tandias, a three-sport athlete for the Cavaliers, finished with a perfect 4.28 grade point average, a goal he set as a freshman. His honors include the Herb Kohl Excellence Scholarship, Wendy’s Heisman State Finalist Award, Wisconsin Elks Association Most Valuable Student Scholarship and the Wisconsin Academic Excellence Scholarship. In the fall, he will attend the University of Wisconsin in Madison to study business.

Competing in athletics helped in the classroom, he said.

“Our coaches set amazing examples of leadership and are very caring individuals,” he said. “I learned a lot of discipline in sports and you learn how far you can push yourself.”

Tandias lists basketball as his favorite sport to play and baseball as his best. He earned all-conference honors as a centerfielder on the diamond. He has also played football at STAA and organized soccer, outside of school.

In addition to athletics and academics, Tandias served as a student ambassador, vice-president of his class, Liturgy Committee member, Marinette County Teen Court member and earned a number one rating in the state solo and ensemble competition for piano — just to name a few of his extracurricular activities. His volunteerism includes serving as a Vincentian (St. Vincent de Paul Society) and he is active at Holy Family Parish in Marinette as a lector and usher.

“It’s really hard juggling everything, but I knew when I started here that I wanted to stay active and be involved,” he said. “It was tough at times, but high school wouldn’t have been the same. You don’t get the same experience if you’re not involved.”

When asked to share a favorite moment from the last four years, Tandias chose a community service event. He donated his time to the annual postal workers’ food drive.

“I was a driver, so we would pick up food and bring it to the post office,” he said. “It was amazing to see all the food donated for NEWCAP or St. Vincent de Paul. I never realized that our community was so generous.”

Molosky left her mark on the basketball court at St. Thomas Aquinas. A four-year starter for the Cavalettes, she scored her 1,000th career point on Jan. 25 versus Gibraltar. She earned first team all-conference honors this past season after receiving second team recognition as both a sophomore and junior and honorable mention as a freshman. Molosky had an opportunity to play college basketball at Allegheny College in Pennsylvania, but decided to concentrate on academics at the University of Michigan where she will be a pre-med/biology major.

“It still hurts not being able to play again,” she said. “It hasn’t sunk in that I’m not going to be returning to the court.”

Molosky credits her basketball success to hard work. She said that she put in as many as nine hours in the gym on some days during the summer.

Molosky serves as an usher at Mass, and finds time to help in the community. She has worked for the postal food drive, the Knights of Columbus Tootsie Roll drive, the Salvation Army bell ringing campaign and the Adopt a Highway program.

“I honestly don’t know how I did everything,” she said. “You get your priorities straight and it’s up to you to manage your time to do what you really want to do.

“A lot of teachers encouraged me to get involved,” she added. “I wanted to better myself, but I also felt that I needed to leave something behind that would make the school better than when I got here.”

Molosky and Tandias both said that they were happy to share the valedictorian honors. The competition brought out their best.

“I wouldn’t want it any other way,” said Tandias. “She worked just as hard as I did.”

“I had this great counterpart in Ryan,” said Molosky. “We pushed each other. In a sense it confirms that we both did a great job.”