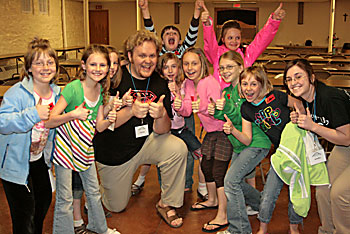 Spiritus retreat team members Tommy Nelson and Jennilee Foreman (far right) share a light moment with Catholic youth at a recent retreat. Spiritus, a retreat ministry based out of Mount Tabor Center in Menasha, presented retreats to more than 5,200 Catholic youths this year. (Submitted Photo | For The Compass)

While the sojourn made unique impressions on the individual spirituality and direction of each team member, the team agrees that the ministry was a leap of faith for each one of them, fortified by an openness and willingness to be stretched beyond imagination and a strong desire to grow closer to God.

They also agree that their variety of backgrounds, personalities and spiritualities enable the team as a whole to offer a connection — a fit — for a wider variety of participants. They say that this variety is the very reason there is room for everyone in this ministry. They believe that God does this.

There were challenges presented by some participants, which varied by age: feeling unloved, unwillingness to participate, apathy towards faith, non-belief, as well as some tough struggles with secular culture issues including drugs, promiscuity, greed and money. All that, plus an ambitious calendar that appeared unrealistic at times, led to concerns over how the team could possibly perform its mission.

And then everything would work out fine, as one team member observed.

“At one point we were called to provide three retreats in a single day — and 12 retreats in 10 days. It was intimidating,” recalls Tommy Nelson of Holy Family Parish in Rockford, Ill. “But it turned out to be one of our best weeks. We could feel the Holy Spirit working through us. Some of the students had profound experiences.”

At what Tommy initially thought was the team’s “worst retreat ever,” a high school junior surprised him with her sudden awakening to the brevity of life. He says it was followed by a powerful conversion to stay close to the Lord and turn her life around, even rippling out to positively impact her friends’ behavior as well. “The Lord was working through me, in spite of me,” he says.

In another “glory moment,” as such experiences have been dubbed, team member Melissa Helt of St. John the Baptist Parish in Waunakee, helped make the connection for a high school senior and self-proclaimed atheist.

“She was entirely closed off. She didn’t want to be there. Into the retreat during a small-group session, she began to ask questions about faith and share her doubts,” says Helt. “Sharing personal experiences that way eventually brought her to celebrate reconciliation and a powerful conversion moment. It’s like Jesus said, ‘Feed my sheep.'”

There are many more moments like these. But for the majority of participants, the team simply plants a seed. “We meet them wherever they are and go from there,” adds Tommy Nelson. “This is good and worthwhile. It’s also the most challenging and rewarding decision of my life.”

As far as vocations are concerned, several of the team members are called to youth ministry. Some are currently discerning religious life.

“This has been the most important year of my life,” says Mark Foley of St. Mary Help of Christians Parish in Sullivan, Wis. “God has been more vocal, speaking more to me. Through this ministry I have learned what God wants — and doesn’t want — of me.”

“I better understand where God is calling me,” says Nick Coombs of Catholic Campus Ministry in Springfield, Mo., another team member who says he is discerning what to give. “To love is to give back to God. My expression of that love is service and prayer.”