To flash or not to flash?

Last Sunday I attended the final Mass celebrated at St. Joseph Church in Norman. Never having been to Norman, located on Highway G about 23 miles southwest of Green Bay, I relied on a GPS navigator to point me in the right direction.

I arrived about an hour early to scout out the church. I also wanted to try something new. Thanks to smartphone technology and social networking, I was able to take photos of the church and immediately post them to our Compass Facebook page. I posted four photos leading up to the opening procession of the Mass, celebrated by Bishop David Ricken.

If you’re not already a fan of The Compass on Facebook, please follow us. We’ll be posting more photos from events in the future.

St. Joseph Church seats about 200 people, and some 300 people attended the final Mass. Needless to say, it was a bit crowded in the church – even in the choir loft. As usual, I moved around the church for different photo angles. During the consecration I was up in the choir loft. While I was taking photos of Bishop Ricken at the altar with Fr. Dennis Drury and Norbertine Fr. Gerald Kempen, I noticed another newspaper photographer in the choir loft. She was easy to spot. She had a flash mounted to her camera and was using the motor drive on her camera to shoot several frames of photos in one burst. All the while the flash was creating a distraction in the church – at least it was for me.

Having photographed countless liturgies in countless churches around Wisconsin and beyond, I am pretty knowledgable about picture-taking etiquette during religious services. At first I glanced back at the photographer, giving her a “what are you doing?” expression. After she continued shooting several more frames with the flash, I stood up and walked toward her, quietly telling her that while the celebrant was raising the host, it would be good for her not to shoot away with the flash. I could tell she didn’t appreciate my comments.

What miffed me the most was that the church interior, during the noon hour, was bright enough not to require using a flash. I scoped out her equipment (it looked like a brand new Nikon D3, one of the most expensive cameras on the market, which can shoot in darkened churches sans flash and put out some fine photos) and rolled my eyes. I was shooting at a mere 800 ASA and with an F-stop of about 3.5 at 1/80th of a second shutter speed. Definitely not the conditions for using flash.

After Mass, I approached the photographer and introduced myself. I explained  that I wasn’t trying to be rude. I simply know from experience that being a distraction at religious events can cause parish leaders to ban photographers from taking pictures, especially with flash. And in that occasion when a flash is necessary, I want to have the option to use it.

Yes, every assignment is an opportunity to teach – and to learn. To view photos from last Sunday’s closing Mass, go to this link.

Here’s one of my photos, taken WITHOUT a flash. 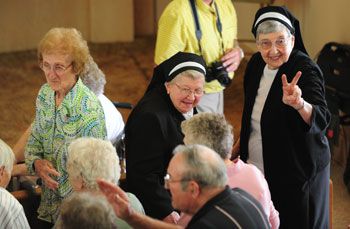