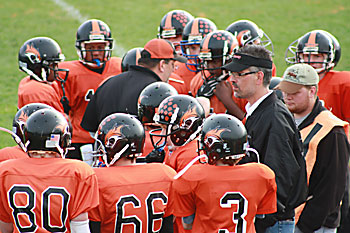 Tom Sontag, center left, and Paul Orlich, two of the St. Joseph Wildcats football coaches, huddle with players during a game last fall. The football program, like other diocesan sports programs, require coaches to complete the diocese’s Safe Environment Program for volunteers.(Submitted photo | For The Compass)

Troy Ness, program coordinator of St. Joseph football, said while the volunteer coaches initially have not always been enthusiastic about participating in Virtus training, they have all found it valuable.

“What it really did was help you notice warning signs,” he said. “When the guy came on (the training video) and said that he was able to abuse this many kids because of the fact that parents weren’t around, that told you a lot. With our program, we want our parents there. We want them involved. We want them to watch what we are doing.

“Everybody we’ve put through the program has come back with positive things to say,” he added. “What bothers me is when someone says those people don’t look like child abusers. What does one look like? We as a society expect everyone to protect us. Parents are blind to the dangers. You have to be involved in your kids’ lives.”

Tom Sontag, who is in his fourth year with the Wildcats and will coach fifth grade football this season, said the Virtus training was emotionally powerful.

“I was really angry because the people didn’t seem to have any problem talking about how many children they victimized,” he said. “It really gives you insight. You don’t ever imagine that somebody could do this to so many kids. It’s a big eye opener. I remember how the whole class was really quiet after watching this.”

Protecting the children and the coaches is taken into consideration, said Ness. For example, the program has a policy that coaches do not give players rides home after practices or games. If it is absolutely necessary for a coach to provide a ride, the child must sit in the back seat.

“Everything is run through me first, so I know everything that is going on,” said Ness. “Virtus works hand in hand with our coaches and parents. We learned the red flags and the situations we need to watch. I think it gives the parents some peace of mind.”

The St. Joseph football program, for students in grades 5-8 from all schools and faith backgrounds, was formed to give young people an opportunity to learn and play the sport, so taking all steps to ensure the safety of the young athletes only makes sense, said Ness. He started the program after witnessing what he considers an unjust situation.

“I came home from work early one day and I saw that there was stuff going on at the park (Marquette),” he said. “I went over to check it out. It was cut day.”

Ness discovered that several players in all grades were informed that they did not make the roster of a local youth program.

“There were kids in tears,” said Ness. “I thought, ‘What’s going on here? This is youth football. All kids deserve to play.'”

Ness met with Fr. Mike Ingold, pastor at St. Joseph Parish at the time, to ask if he could bring back a football program. Ness had played for St. Joseph during his youth football days.

“Fr. Mike basically asked, ‘What would we have to do?’ I said, ‘All you have to do is bless it and I will do the rest,'” said Ness. “(Fr. Ingold) was very supportive of the program. Fr. Don (Everts, pastor of the Quad-Parishes of Green Bay, which includes St. Joseph) has also been very supportive.”

The Wildcats had 17 players its first season. This year, Ness expects as many as 160 athletes in the program. The Wildcats will field two fifth, seventh and eighth grade teams and a sixth grade squad. Eighteen to 20 coaches will work with the youth. Ness credited Carol Kittel, business administrator for the Quad-Parishes, for making sure all coaches are in compliance with the safe environment requirements.

St. Philip and St. Thomas More are among St. Joseph’s football opponents. Coaches from those programs and all diocesan school or parish athletic teams must go through background checks and complete training. St. Joseph football has rejected two coaching applicants based on their background checks. Any incident of abuse would put an end to the Wildcats, said Ness.

“It would absolutely destroy our program,” he said. “It would destroy our mission. We not only work to develop better football players, but better people. We push grades. Our seventh and eighth graders need to get a ‘C’ average or they can’t play in the tournament at the end of the season. We’ve helped kids out (academically and general guidance) who are no longer in the program anymore.”

Mike Wied, who in 2009 earned all-conference honors as a defensive lineman at Green Bay Southwest High School, joined the St. Joseph football program in eighth grade. He described it as one of the best experiences of his life.

“You could tell the St. Joe’s program and coaches not only took the time to train and prepare us for games and life challenges, but also did it with passion,” said Wied.

“(The experience) taught me to trust in your peers and mentors,” he added. ” It taught me to always give my best no matter the situation. It taught me maturity and leadership, all while still having a blast on the football field. I look back at my accomplishments in football and school, and I always find myself going back to my roots, which was becoming a St. Joe’s Wildcat. To succeed, a solid foundation of discipline, self-worth and a gridiron attitude is necessary. I believe St. Joe’s has given me that and much more.”

“We need to continue to do everything to make this a good experience for the kids,” said Ness. “The kids remember the experience more than the wins and losses.”

Next issue: Why ordained ministers choose to be Safe Environment leaders.