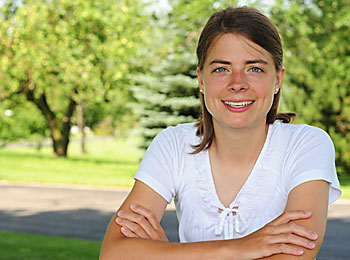 A 2006 graduate of Xavier High School in Appleton, she chose the Benedictine college after learning about it at a college fair. What she really liked about St. Benedict “was just the opportunity it had to offer me for spiritual growth.”

Sharing faith-filled community with her three roommates, including daily prayer, was an important part of her college experience. Attending this Catholic college for women founded by the Benedictine Sisters in 1913 was an evolving experience for her. Here she began to listen to God, she said, “and took my faith in my own hands.”

Its mission as a community committed to academic excellence, social justice and leadership was the perfect fit for Ebben, who is spending the summer serving for and with Catholic young adults and is preparing to leave for service in Nicaragua later this summer.

She is also in the midst of exploring a vocation to the religious life, she said.

Until mid-July she is working with Catholic Youth Expeditions (see www.cyexpeditions.org). Directed by Fr. Quinn Mann, this summer program based out of Baileys Harbor in Door County has as its mission “to encounter Jesus Christ and foster Catholic Christian community through expedition retreats of prayer, proclamation of the gospel and outdoor adventure.”

“I absolutely love the experience,” said Ebben. Daily prayer and adoration as well as daily Mass are just part of this summer experience living amidst the natural beauty of Door County. There is also the hiking, swimming, biking, sailing and kayaking to look forward to.

Several of the 27 youth staff members are considering religious life as a chosen vocation, she said. Three older adults make up the current 30-member team, she said.

Ebben said she had some initial qualms about leaving for Nicaragua so soon after spending the first part of the summer in Door County.

“If it’s something you really want to do, you should do it,” Ebben said her parents, Mary and Mark Ebben, told her. She also has two older brothers and two younger sisters.

Last summer, prior to her senior year of college, Ebben served as an intern at St. Willebrord Parish in Green Bay. It is well-known throughout the diocese for its large Hispanic membership and service to the immigrant community of the area. Her degree in peace and justice, as well as Hispanic studies, made St. Willebrord the perfect place to further explore opportunities in her chosen fields of study.

“They had never had a position like this before,” said Ebben. As an intern she had the opportunity to hone her Spanish skills in a variety of ways at the parish, such as working in the Vacation Bible School, serving as a translator and doing Hispanic outreach work.

During her Christmas break earlier this year she returned to the parish to do research for her senior thesis that has now been published as a book and is being distributed throughout the Green Bay area. “Through Their Eyes: Experiences of Mexican Immigration in Green Bay, Wisconsin” tells the stories of six Mexican immigrants to the Green Bay area. Sr. Melanie Maczka, pastoral associate at St. Willebrord, was a big help with the project, Ebben said.

One hundred copies of the 120-page book were published through a grant she received from the College of St. Benedict. It includes both Spanish and English text.

“It was easy because it was something that I enjoyed,” she said of the project.

What did she learn during her research? The immigration question is complex, she said. But what is clear-cut is the closeness Mexican immigrant families have as a family unit and that faith plays a central role in their lives, she said.

Her goal with the book is simple: that readers experience “the humanity behind the people.”