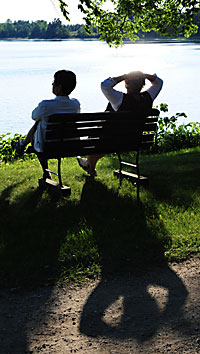 This year Holy Name Retreat House is celebrating its 60th anniversary. Summer retreats are in full swing and more retreatants are needed to keep what one regular visitor calls “a little taste of paradise” afloat.

In recent years Holy Name Retreat House has been facing an uncertain future due to a sputtering economy and drop in retreat participants. Last year, Bishop David Ricken oversaw the formation of a board of trustees entrusted with helping the retreat house regain financial stability.

The board’s efforts are making a difference, said Barbara Conder, executive director of Holy Name Retreat House, but more work is needed if the facility’s long-term success is to be reached.

“Last year was a real pivotal year,” said Conder, who took over as executive director last January. “The board of trustees … made a very huge commitment that they wanted to see (Holy Name) stay open. The way they stepped up and said, ‘No, this is too great a treasure for our diocese (to have it close). We know that we can make it go.’ They took it on as their goal to make this year happen.”

After taking steps to cut a projected deficit nearly in half, added Conder, the board began looking at other ways to attract new retreatants.

Karen Wautlet, a member of Holy Name’s board of directors, acknowledged that bringing in new people is crucial to the facility’s livelihood.

“I think one of our biggest challenges is to present a program for next year that will draw a larger variety of people,” she said. “We are looking at doing a couples retreat and a mother-daughter retreat.”

Another possibility would be retreats with people studying the U.S. Catholic Catechism for Adults, said Wautlet. “It’s a new culture out there and we need to try and draw the younger people. We need to get creative” with retreat topics. 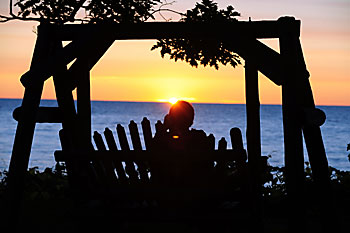 Conder agreed. “I just wonder whether we are really meeting the needs of those who want to come here right now,” she said. “So this next year, we are looking at a different process of scheduling the retreats. That process is to identify groups of people that we know usually are retreat goers. One example would be like Cursillo,” the Catholic movement that provides spiritual encounters in a retreat setting.

She said that by catering to groups like Cursillo, Holy Name could develop retreat topics to draw them to the island.

Holy Name opened as a diocesan retreat house in the summer of 1951. Comprised of 60 acres of island property, the retreat house was gifted to the diocese by George Baudhuin. Throughout most of its 60-year history, Holy Name has attracted thousands of people from around the state and beyond to Chambers Island for retreats lasting several days to one week. Retreats are held each year from May to September. The island is uninhabited during winters.

Since Holy Name Retreat House is located on an island, retreatants meet in Fish Creek and take a 45-minute ride aboard the facility’s boat, the Quo Vadis.

In years past, retreat openings filled up quickly. A few popular speakers continue to bring people out to the island in droves each summer, including Bishop Robert Morneau, who led a two-day retreat for 62 people June 29 and 30.

“The natural beauty up here is just incredible,” said Bishop Morneau, who has been leading retreats at Holy Name for 35 years. “The fact that silence is pretty well maintained by the people, it’s a very nice feature of the retreat.”

The retreat experience on Chambers Island is “grounded in creation,” noted Bishop Morneau.

“The fact that it’s off the mainland, there’s a sense of leaving, really leaving home, rather than just driving two miles or 20 miles to a retreat house,” he said. “That separation and (then) going back has a nice component to the pilgrimage. That whole concept I think is powerful.”

Dona Schmitt, who has attended retreats at Chambers Island for 20 years, said Holy Name Retreat House helps her to reconnect with God.

“God is really here,” she said. “I think the quietness gives you a chance to hear God speaking and hear what’s inside. You also have a chance to get away from the busyness of the world, the noise that goes on and the stuff that goes on in our lives.”

Schmitt and her husband, Green Bay Mayor Jim Schmitt, are active supporters of the retreat house. She said she often encourages friends to experience a retreat on Chambers Island.

“It’s so serene and beautiful. It’s a little taste of paradise,” she said. “I’ve given out gift certificates to encourage people to come up. It’s one of those things; once they experience it, they come again. It just takes one time because God is here.”

Conder said word of mouth has been one way to encourage people to experience Holy Name, but more work is needed to ensure the diocesan retreat house’s success. Increased publicity, particularly throughout the Midwest, is one way.

“It’s ironic that we’ve been around for 60 years and people still say, ‘Oh really? The diocese has a retreat house?'” said Conder. “To have this here in Door County and not advertise it throughout the Midwest. … We are missing a key component, because people in the Midwest come up to Door County.”

This year the retreat house has advertised in “Catholic New World,” the Chicago archdiocesan newspaper and “Our Sunday Visitor,” a national Catholic newspaper. “We’re listed now as one of the Midwest retreat houses (in Our Sunday Visitor), which we were never before,” said Conder. “All of the dioceses around (Green Bay) have Catholics and some travel a lot further to attend retreats every year. The key then is to start looking at inviting people from those dioceses” to attend and even host retreats.

Within the diocese, the retreat house is establishing a network of “parish ambassadors,” people who have attended retreats at Holy Name and who can encourage other parishioners to experience a retreat on the island.

“We have about 70 or 80” ambassadors, said Conder. “For them to promote it in their own parish family, this makes a big difference.”

What also makes a difference is having the support of Bishop David Ricken.

“Bishop Ricken is so dedicated to this; I don’t know what we would do without his support,” said Conder. “Even though right now we are treading water, he keeps throwing us that old life saver of hope, (saying) ‘Let’s be patient. It will work.’ For him to support us means that, yes, he wants us to continue.”

“One of the great needs today in our world is for silence and solitude and they are going to find it here,” he said. “You probably won’t find it as readily in other places, where there’s talking on retreat and a little more social activities. At Chambers Island they are going to find (God) through silence and solitude if they give themselves to the experience.”