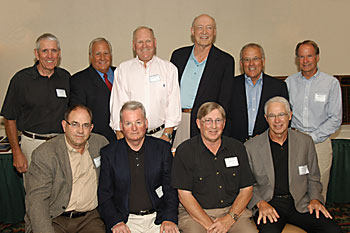 While several members of the 1960 team remained in the area, a number traveled a great distance to share in the recognition.

Peter Vanderhyden, a retired International Paper executive and resident of Huntington Beach, Calif., was a senior and a standout player on the 1960 team. When asked what it was like to win a state championship, Vanderhyden replied, “We expected to win every game, period, which was a reflection of Coach McClone’s philosophy.”

For his fellow teammates, he had nothing but praise.

“On and off the basketball court and in both practices and games, my teammates were respectful of each person’s role and enjoyed each other’s company. While some may have been better basketball players than others, the way Coach McClone ran the show there were a great number of lineup variations that rotated many players, so everyone really was able to contribute,” Vanderhyden said.

Jim Rueckl, a senior standout player who also lives in California, said his team’s defeat of Racine-St. Catherine’s was like a Hollywood script. “It was one of the biggest moments in the Twin Cities, both in Menasha and Neenah. … If the game would’ve been played today, Hollywood would make a movie of this David and Goliath event.”

Several players from the team went on to play college basketball and were quite successful. Among them, Laemmrich and Koerner played for Texas A & I; Vanderhyden played for Marquette and Herlache played for Ripon. To Vanderhyden, what really matters after 50 years are the people that the team members have become.

Several local members of the team get together regularly for a game of golf or lunch. Martin said the group doesn’t live in the past. “We talk about families, careers, etc. and really more often these days, we talk about Social Security.”