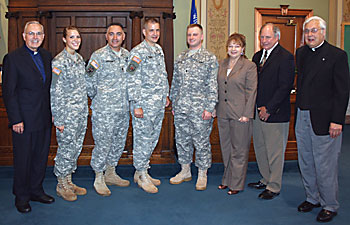 Beau Liegeois, center right, was commissioned as a first lieutenant in the U.S. Army during a ceremony at the Brown County Courthouse July 15. On hand were his parents, Mary Jo and Paul Liegeois, standing next to Beau; Fr. Paul Demuth, far left, his pastor at St. Elizabeth Ann Seton Parish; and Msgr. Jim Dillenburg, retired pastor. Also pictured are Sgt. Amy Sydow, Capt. Daniel Kahlhamer and Col. Mike McKenna.(Photo courtesy of Beau Liegeois | For The Compass)

“I’ve had an interest in joining the military my entire life and doing some sort of service for the country,” said Liegeois, a member of St. Elizabeth Ann Seton Parish in Green Bay. “I just went to see my local recruiter last August. We went over a lot of different options and the Judge Advocate General’s Corps just seemed like the most perfect opportunity. They had a need for attorneys in the Wisconsin National Guard, and it just seemed like a perfect fit with the job I have here in the D.A.’s office.”

Liegeois will report to Fort Lee at the end of October. The training will include physical tests, military tactics and law school activities, he said. He is running daily to prepare for the two-mile test as well as doing push-ups and sit-ups.

“I have to meet the same physical standards as every other soldier,” said Liegeois. “It’s a whole different set of legal standards and laws you have to know for military law. There was nothing like it offered in law school.”

His experience as a prosecutor fuels his interest in working with military criminal law, he added.

“There are other military issues like contract work and land use type issues,” he said. “One of the more important duties of the JAG Corps is making sure, when soldiers are deployed overseas, that their legal affairs — for example, wills and life insurance policies — are taken care of at home so they don’t have to worry about them when they’re abroad. There is so much stress in a soldier’s life that anything you can do to alleviate any of the day-to-day concerns is a valuable part of contributing to the military. I will be exposed to much more diverse legal issues.”

Liegeois himself may be deployed domestically or overseas at any time.

“Wherever the Army needs an attorney in the world, I can be sent there,” he said. “The deployments can be a couple weeks or they can be a full year if it’s Iraq or Afghanistan.”

A graduate of the University of Wisconsin and Valparaiso University Law School (Ind.), Liegeois sought a military path following high school. He received a congressional nomination to attend the U.S. Military Academy at West Point, but was not accepted. Rather than be discouraged, the experience strengthened his desire to serve.

“I visited West Point with my parents and just took the weekend tour,” said Liegeois. “The value system that they have, just the sense of duty to the country that the students have, stuck with me forever.”

Family, friends and colleagues filled the courtroom for his swearing-in ceremony, which included an individual blessing by Msgr. Jim Dillenburg, retired pastor of St. Elizabeth Ann Seton, and a blessing for the entire military by Fr. Paul Demuth, current pastor. The presence of the two priests was of personal importance, said Liegeois.

“Faith is a huge part of a soldier’s life,” he said. “Just to get through the daily struggles I’m expecting to have in front of me, the daily hardships, prayer is going to be essential.”

His faith has guided him in his role as a prosecutor, which calls for personal ethics in seeking justice, he added.

“My day-to-day decision making is incredibly influenced by my Catholic upbringing,” he said. “My parents took me to church every Sunday. My grandparents had a substantial influence on me growing up. The moral and ethical judgment that you learn from a Catholic upbringing factors into everything I do on a daily basis and that’s going to continue in my military career.”

“Some people ask me why I’m doing this,” said Liegeois, who also coaches the mock trial team at Green Bay East High School. “The very simple answer I have for them is that it’s just something I feel that I have to do. This is important to me. It’s about patriotism. It’s about country, a sense of duty, a sense of honor. Faith is a big part of it also. I’m very excited to get started.”