His love of scouting continues today, more than 60 years later. Fr. Strebel serves as diocesan regional scout chaplain and his presence is felt in three camps in the area. He serves at Camp Makajawan near Pearson, Bear Paw at Mountain and Markotan at Gardner Dam. 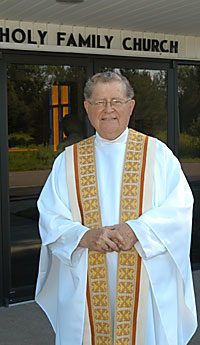 Fr. Roger Strebel is retiring as pastor of Holy Family Parish in Elcho and St. Mary in Pickerel on Sept. 1. (Dick Meyer | For The Compass)

“My most important duty as scout chaplain is just being present for the scouts,” he said. Fr. Strebel also conducts non-sectarian services at the camps, is available for counseling and visits different camp programs. He is also a life member of the executive board of the National Catholic Committee on Scouting.

The son of Martin and Grace Paque Strebel attended Green Bay’s St. Patrick Grade School and Central Catholic High School. He attended Sacred Heart Seminary in Oneida and St. Francis Seminary in St.Francis and was ordained on May 28, 1966 by Bishop John Grellinger.

His first parish assignment was at Nativity of Our Lord Parish in Green Bay. His first assignment as pastor was at Sacred Heart in Marinette — now merged with Holy Family— where he also taught part-time at Marinette’s Catholic Central High School (now St. Thomas Aquinas) and then served as chaplain at Marinette General Hospital.

Prior to coming to Holy Family and St. Mary, he served a long list of parishes including those in Tigerton, Marion, Glenmore and Stark, St. Hyacinth in Antigo, Lakewood, Walsh, Wagner, Peshtigo, Wausaukee, Amberg, Redgranite and Poy Sippi.

Over those years, Fr. Strebel noted how the changes in the church after the Second Vatican Council (1962-65) came quickly and “they haven’t stopped yet.” He added that he didn’t mind at all when Mass was changed from Latin to the English language.

Today, he said he finds great joy in celebrating the sacraments and being a presence for his flock.

JoAnne Swomia of Holy Family Parish, which held a farewell reception for Fr. Strebel Aug. 7, said she is sad Fr. Strebel is leaving and hates to see him go.

“There is no doubt the parishes will miss him,” said Lynn Sexton, chair of the liturgy committee at Holy Family. “He gave us strength and was so effective in guiding us in parish life. (But) we know he needs a rest – he has never taken a vacation.”

Parishioners at St. Mary will also miss their pastor.

“Fr. Roger was the voice of the poor and, through his homilies, he encouraged us to reach out to the needy,” said Nancy Killoren, secretary of the parish council. “Father supported and was our spiritual guide for our human concerns, whether it was the local food pantry or a family in need. He encouraged us to give and be Christ-like in our actions.”

Killoren added that Fr. Strebel loves nature and animals and was often consulted for his vast knowledge of natural medicines. (He holds a master berbalist degree from Clayton College in Birmingham, Ala.)

Fr. Strebel plans to move to Townsend and said that Bishop David Ricken has asked him to help out in parishes in the north central part of the diocese.

As he has always done, Fr. Strebel said he will do what is asked of him — joyfully celebrating the sacraments and being a presence wherever he goes.