Jim Hogan, who has served as coordinator of the Bishop’s Charities game since 1965, said the undertaking meant some risk on the part of the diocese. 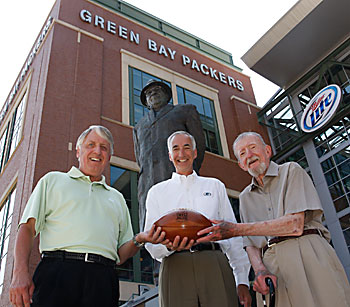 Jerry Pigeon, left, Denis Hogan and Jim Hogan hold a wooden football in front of the Vince Lombardi statue outside Lambeau Field. In its 50th year, the 2010 Charities Game marks a change in leadership. Pigeon, who has served as general chairperson of the game since 1988, is retiring from the post. Denis Hogan will become the new general chairperson. Jim Hogan will remain the game’s coordinator, a post he’s held for 45 years. (Rick Evans | For The Compass)

Season ticket holders were given the first opportunity to purchase tickets for the exhibition game.

“Whatever was left was given to us and it was our responsibility to sell them,” said Hogan. “It wasn’t bad at first with Lombardi and the team’s success, but as the years went on, the season ticket holders didn’t buy them like they used to. We had to push the level of sales up.”

“Gene Sladky and Ed Gagnon were very involved with the diocese and they were the ones who secured most of the people who did the work,” said Hogan. “They got the Knights of Columbus and the Holy Name Societies involved. Obviously, you wouldn’t have had a game if Lombardi wasn’t Catholic.”

Fr. William Spalding, director of the diocesan Apostolate at the time, and Fr. Orville Janssen, editor of the Green Bay Register, played key roles in securing Bishop Bona’s approval for the game. Hogan also pointed to Lee Remmel, former sportswriter and longtime public relations director and historian for the Packers, and Mark Wagner, director of ticket operations for the team, for their contributions to the success of the Charities Game.

Hogan began working for the Apostolate in 1955. Msgr. Peter Klauck recruited him to serve the Bishop’s Charities Game.

“He told me that ‘somebody has to stay on top of the game,'” said Hogan. “Fr. Spalding said, ‘The other people are all volunteers, somebody (from the diocese) has to coordinate it.’ I’ve been in it longer than anyone.”

Fourteen regions were designated for ticket sales. Volunteer area chairpersons recruited crews to promote the game and sell tickets in their communities. The diocese also produced the game program for several years, earning revenue from advertising sales. Hogan estimates that the diocese sold 20,000 to 25,000 programs annually.

In 1994, the Packers assumed the game’s business-related tasks, including ticket sales. Bishop’s Charities Game tickets were made part of the season ticket package. The Packers have made a standard donation to the diocese annually ever since in recognition of the game.

Bishop’s Charities Game traditions started with the 1961 contest. Most valuable players were named for both the offense and defense. Tom Moore and Bill Forester were the first recipients, respectively. MVP awards were temporarily discontinued from 1964 to 1968. In recent years, a single most valuable player has been named from the Packers.

Jerry Pigeon, who has served as general chairman of the game since 1988, said selecting the game’s MVP is sometimes a challenge.

“You always worry that with the rookies coming in,” he said, “that one may have a great game and you don’t know if he will be around next season (to receive the award). Aaron Rodgers was last year’s MVP so we were safe this year.”

The bishops have thrown out a ceremonial first pass since the game’s inception. Bishop Bona is pictured throwing a football on the cover of the game program for the fourth annual Bishop’s Charities Game in 1964. Bishop David Ricken continues the tradition.

Hogan recalls Bishop Aloysius Wycislo’s fondness for the annual game, which over the years has provided more than $3.4 million for diocesan charities. Bishop Wycislo served as bishop of Green Bay from 1968 to 1983.

“He loved it,” said Hogan. “He invited all his relatives. That was a big moment for him and all his brothers and sisters. He was very close to Bart Starr. Bishop Wycislo thought the world of Starr.”

The Packers won the first seven Bishop’s Charities Games. The team enjoyed a very successful run during Bishop Robert Banks tenure as Bishop of Green Bay, 1990-2003. The Packers defeated New England 28-7 in 1991, Bishop Banks’ first game, and won the next 11 games in the series.

“I can remember Bishop Banks (Boston native) up in the press box with a shirt on that was half Packers and half Patriots,” said Pigeon, a Green Bay native who worked for Associated Bank for 46 years.

The 2010 Bishop’s Charities Game will signify a change. Denis Hogan, regional president of Associated Bank and Jim’s son, will become the new chair for the game, succeeding Pigeon. Prior to becoming general chairman, Pigeon, a Green Bay native, served as the Green Bay east side chair.

“I worked under John Ryan. He taught me the ropes,” said Pigeon. “I was part of the working crew and when John retired, I took over his spot. When Dick Van Laanen died, I became the general chairman. I enjoyed the run.”

Pigeon, who serves as treasurer of the Green Bay Chapter of NFL Alumni, Inc., said he is proud to have been a part of the Charities Game team.

“I’ve had many nice memories on the field,” he said. “I’m very close with Jim. He’s almost like a second father to me. Jim was the one that got me involved and our bank was very involved.

“I used to wait on Lombardi at the bank when I was a teller,” he added. “The bank also used to print the tickets. We used to send out order forms for tickets to our banks throughout Wisconsin and in the UP. I was calling on a lot of these banks through my job at the time. We were able to sell a lot of tickets. We would sell tickets to busloads of people. Some of the banks would tie it into their summer picnic for the employees. I would get them parking spots at Kroll’s West. It was a lot of fun.”

Pigeon’s most memorable Bishop’s Charities Game though is the first one.

“My dad was at the very first Packer game, so growing up, he instilled that in us,” he said. “Like fathers who take their sons fishing, we went to Packer games. I was probably about 14 years old. I was at the game with my parents, sitting in the north end zone. We were sitting down low. Don Chandler was kicking for the Giants. He kicked an extra point and the ball fell in my lap.”