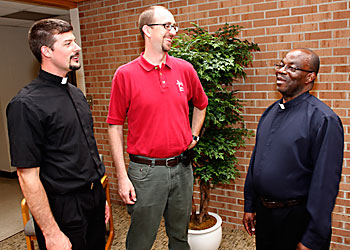 Fr. Benjamin Sember, associate pastor at Nativity of Our Lord Parish in Ashwaubenon, and Jamie Whalen, director of faith formation, visit with Fr. Raphael Chiaka at the parish offices. Fr. Chiaka has been serving at Nativity since arriving in Green Bay last March. (Rick Evans | For The Compass)

Fr. Doerfler noted that these foreign-born priests are not the first to come to the Green Bay Diocese. Five years ago, under the guidance of then Bishop David Zubik, Fr. Celestine Byekwaso of Uganda was invited to serve in the diocese after completing his master’s degree in liturgical studies from St. Mary’s Seminary in Mundelein, Ill. Today, he serves as the administrator of St. Anne Parish in Coleman/Lena.

“In many ways, Bishop David Zubik started this off,” Fr. Doerfler said. “He started the conversation, so to speak.”

After more than 20 years of teaching theology both in his native Archdiocese of Ibadan, Nigeria, and in Europe, Fr. Raphael Chiaka was asked by his archbishop, Felix Job, to take a break. Due to a friendship between Fr. Chiaka’s cousin, Bishop Lucius Ugorji, of the Diocese of Umuahia, Nigeria, and Bishop Ricken, Fr. Chiaka learned about Green Bay. He arrived here last March and was welcomed with open arms at Nativity of Our Lord Parish in Ashwaubenon.

“There really have been no struggles,” said Fr. Chiaka, who was ordained in 1976. “All has been fine and good.”

A month later, Fr. Ibekwe and Fr. Elue landed in the diocese. Fr. Elue was sent to St. Mary Parish in Menasha while Fr. Ibekwe has been ministering at Holy Family Parish in Brillion. The two priests, who have each been ordained nearly five years, were both students of Fr. Chiaka while seminarians studying in Nigeria.

The priests have been given a time of several months to become accustomed to life in the States. This has included classes in accent reduction. The three of them have been meeting regularly with Nadia Venesse, a language instructor at St. Norbert College who specializes in pronunciation refinement. 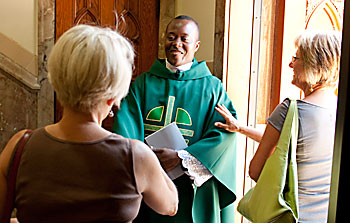 Fr. Callistus Elue greets parishioners after morning Mass July 27 at St. Mary Church in Menasha. Fr. Elue is one of three priests who recently arrived from Nigeria to serve in the Green Bay Diocese. (Kasi Koshollek | For The Compass)

Fr. Elue, 38, has found these classes quite helpful. “Nadia is there for us. I know she wants to help us,” he explained.

The priests said they have received encouraging words from their respective parishes.

In celebrating the Mass, Fr. Elue was surprised by the briefness of the Mass here.

“I am used to a very, very long Mass,” he said. “A typical Mass in Nigeria might last four hours.”

Other cultural challenges that the priests have noted as being difficult and, at times, comical have included buying a cell phone, applying for a driver’s license and getting accustomed to new cuisine. Fr. Elue said that it was a real challenge for him to understand some of the names of the American dishes. So much so that he quickly learned to just say, “I will have that,” while pointing to the person’s plate next to him.

While they all miss their homeland, the three priests can see God’s hand guiding them in this new chapter of their priestly lives.

“This is a work of God,” explained Fr. Ibekwe.

The influx of foreign-born priests to the Diocese of Green Bay is not new. In fact it is a trend that is occurring in dioceses across the United States. In some ways the U.S. church, which once was a leader in sending their own priests and missionaries to far and distant lands, is now on the receiving end of missionaries arriving here. According to a recent study by Georgetown University’s Center for Applied Research in the Apostolate (CARA), more than 5,200 foreign-born priests now minister in U.S. dioceses.

As well, the number of foreign-born seminarians studying for dioceses in the United States is on the rise. In their annual survey of the ordination classes, the U.S. Conference of Catholic Bishops (USCCB) reported that more than 30 percent of the priests ordained in 2010 were born outside the United States. The report added that the number has remained between 20 and 30 percent over the last 10 years.

The Diocese of Green Bay recently had two international students in their seminary program. Last June, Fr. José Castañeda, a native of Guatemala, was ordained a priest for the Green Bay Diocese. In the summer of 2013, Alvan Amadi is scheduled to be ordained. Amadi, 29, is from a small town in southeastern Nigeria and is a theology student at the American College of the Immaculate Conception in Louvain, Belgium.

“I feel blessed to study for this diocese. I keep in mind the example of the remarkable men and women, mostly Irish missionaries, who left their homeland, their families and friends to bring the message of the Gospel to my forebears in southeastern Nigeria and other parts of Africa,” explained Amadi. “Perhaps, it is not such a bad idea to think of repaying the favor, especially as the church in Africa is gifted with an abundance of vocations.”

According to Fr. Doerfler, the selflessness and dedication that men like Amadi and others have shown has been quite a gift to the diocese.

“I admire their dedication to priestly ministry. Coming to minster in a country that is not your own really takes a special commitment,” he said. “You are going away from family and friends and coming into an environment that is very different in many ways and that takes a special call to serve the church and minister to her people. I appreciate that service to the people of God.”