She and her late husband, Melvin, raised their children on a dairy farm east of Antigo. There were no children for the first eight years of their marriage and they thought about adopting. But then came Melanie, Julie, Elizabeth (Liz), Kevin and tag-along John, several years after Kevin. Julie, now Julie Rindt, said she and her brothers and sisters loved the farm and her dad would often take them along on his milk truck route. 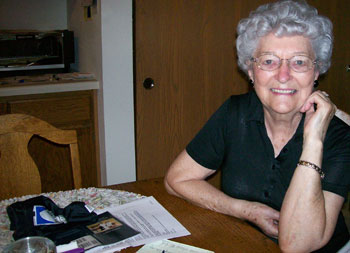 “He would pile us in the truck and away we would go,” Julie said. “I remember once we did that while Mom was in the hospital having a baby.”

Melvin died in 2001 and Jane moved to an apartment in Antigo after selling a portion of the farm.

Her faith, as well as her family, has always filled an important part of her life. She has been an active member of St. John the Evangelist in Antigo most of her 82 years.

“I had faith-filled parents and grandparents. My grandparents came from Poland, Ireland and Germany,” she said. “I had the best parents, the best husband and the best family.”

She was the oldest in a family of six children. One brother died at age 18 from polio and a sister suffered ill-effects of the disease, leaving her handicapped. But there were happy times as well when she worked with her father as he did his farm chores. “I thought of myself as his hired hand and helped him with the horses on threshing days,” she explained.

Jane attended country school and graduated from Antigo High School. She and Melvin married in 1949, shortly before he joined the Army. It was while they were stationed in Philadelphia that Jane began a life-long devotion to the Blessed Mother. Every morning she would go to the Miraculous Medal Shrine and pray.

She became a promoter of the shrine and has 31 relatives as members. “I signed them all up,” she said, smiling broadly.

“The Blessed Mother has always been there for me. She was with me when my mother died, and praying the rosary for guidance helped me through that difficult time.” She still makes the rosary an important part of her early morning prayers and her devotion is well-known throughout St. John’s.

As a young woman, nearly 60 years ago, she joined the Christian Mothers Society of St. John’s. The name was later changed to Christian Mothers and Altar Society so that young, single women would feel more comfortable joining.

And she is busy at a great number of other things that proclaim her faith.

She is an assistant catechist, with her grandson Taylor, a member of the first grade class. Jane plans to assist in the second grade next year so she can help Taylor make his first Communion. Over the years she has sung in the choir and still sings at funerals when asked to do so. She has served on the worship committee, is a past-president of the DCCW Vicariate II North and still attends meetings. She willingly leads the congregation in the rosary before Mass and, maintaining her love for children, is a prayer partner with them.

Her pastor, Fr. Charles Hoffman, said Jane is always there to help the little ones with their faith. “You can count on Jane to teach catechism, to attend wakes and funerals and do other chores around St. John,” he said.

Her homemade cakes and jams are always a hit at the fall festival. Jane is also a lay member of the Religious Hospitallers of St. Joseph. Sr. Dolores Demulling a said Jane is a “very generous, faithful associate and she brings a certain joy wherever she goes.

“She has suffered in life but she suffered in joy,” added Sr. Dolores. “And she is an excellent care giver.”

What does Jane do in her “spare” time? She is a gifted artist and has painted pictures for each of her children. Arthritis prevents that now, but several paintings hanging in her home offer proof of her talent.

She enjoys traveling and the Red Hat Society occupies her time one day a month when she meets for lunch with them. Her friend, Elvira Frisch, said Jane is instrumental in making everyone have a good time. She’s usually a standout, wearing a red baseball cap.

There was one thing Jane wanted to make clear. “Don’t make me out to be saintly,” she said. “Just say I’m happy. I think I’m living heaven on earth. I’ve been blessed my whole life.”