Summer storms cause havoc at churches around diocese 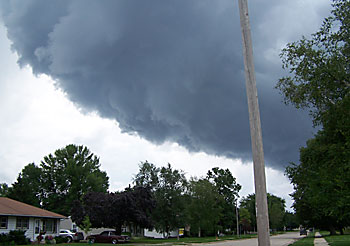 A dark cloud rolls over Henry Street in Neenah prior to dropping hail and spawning a water spout on Lake Winnebago July 20. (Submitted photo by Sally Bellile | For The Compass)

The area was pummeled by straight-line winds of tornado-like force that ripped the roof off the Wittenberg-Birnamwood High School on July 20 and knocked over trees in St. Philomena’s cemetery on the edge of town.

“It came up so fast and when it did come down, you couldn’t see outside the window,” Fr. Scesney said, adding that the trees were removed by tractor by a farmer who planned to use them for firewood.

The same series of storms blew down the fence surrounding the football field at Xavier High School in Appleton and toppled a large tree onto the bleachers. An earlier June storm had flipped the school’s high jump pit, causing over $2,000 in damage.

According to Tammy Basten, diocesan director of facilities and properties, the largest property claims for insurance are from winter ice and summer wind damage.

St. Therese Parish in Appleton had water damage to the roof of their vacant school building, according to Barb Miller, business administrator. There was also flooding in the basement of the parish offices and the former convent, which now houses the offices for Catholic Charities. There was even water — driven by 70 mph winds — forced in under the church doors.

Miller believes the problem was aggravated by nearby street construction.

“Wisconsin Avenue is being torn up and new sewer lines put in,” she said, “and that may have disturbed the soil. We never had (water) problems before.” A 12-14 hour power outage, which shut down the sump pumps, added to the mess.

In nearby Neenah, streets flooded on July 23 and 24 after more than seven inches of rain fell in a few hours’ time. The parish office and school building at St. Margaret Mary Parish were flooded, but their gymnasium and its lower level cafeteria were spared, allowing the end-of-July summer theater program to be moved there. Parish secretary Sally Bellile said that the sump pumps at the school worked so hard to keep water out during the storm that their circuit breaker blew, shutting the pumps down completely.

Over at Ss. Peter and Paul Parish in Kiel, damage also came from the sky, but not as rain.

A couple of years ago, lightning struck the church, according to parish director Joe Zenk, and damaged some electrical wires that eventually shorted out the parish sound board. By the beginning of this July, the parish had accumulated enough money to buy a new sound board.

“Then, last week (July 13), we get hit again,” said Zenk. “And the board went out. Not completely, but parts of the system went out.”

Additionally, the phones at the school and parish center were knocked out, as well as parts of the Internet service at the school.

“The parishioners have been super,” Zenk said, “looking into the sound system and trying to trace the damage. They’re using their own time to get the system back up and working.”