APPLETON — Although Fr. Gerald Falk, 80, has been a priest for 51 years and pastor at St. Thomas More Parish in Appleton for 40 of those years, he says that it has only been in the last 10 years that he really began to understand what being a priest means.

“When I came here (to St. Thomas More), I was 40 years old,” he said. “I was young and didn’t really grow in wisdom until I was 70. I say that honestly. I worked hard as a priest and tried to relate with people, but I really I don’t think I got the feel and the sensitivity towards the people. I really didn’t listen as much as I should to them. Since about (age) 70, that has changed.”

On Sept. 15, Fr. Falk will be granted senior priest status and retire from the parish he has served since 1970. 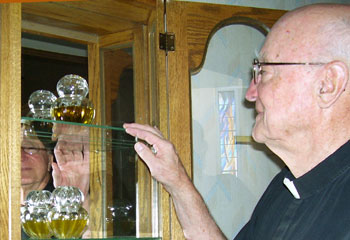 Fr. Gerald Falk, who has served as pastor of St. Thomas More Parish in Appleton for 40 years, is retiring on Sept. 15. A central feature of his ministry has focused on the sick of the parish, and of the broader Appleton area. He is often asked to anoint someone after weekend Masses. Here he reaches for the Oil of the Sick in the parish ambry. (Patricia Kasten | The Compass)

In those 40 years, Fr. Falk has seen his parish grow to more than 1,100 members, build its first church building in 1988 (before that, Masses were in the school gym) and add a religious education/administration building in 1995. But what he has also seen grow — and is most proud of — is the parish’s sense of community.

“This is the honest truth,” he said, “they know that they are the body of Christ, because they are involved. Not only with caring for the sick, but they are involved in so many areas in the community: LEAVEN, St. Vincent de Paul, the food pantry. They just really witness to the good news.”

That wasn’t the case when he arrived in 1970. The parish council was in its rudimentary stages and there were no commissions — like worship, social concerns and liturgy. There was very little of what Fr. Falk calls “working together in the spirit of Christ.”

“When I first came here, religious education and the school were fighting,” he recalled. “But not anymore. I said, ‘If you’re fighting, I’m going.’

He credits those around him — from leaders of finance and parish councils and business administrators, to deacons and retired Capuchin Fr. Dave Belongea, who has been assisting with Masses for many years. He also credits the two Franciscan sisters who have served St. Thomas More for the last 34 years: Sr. Betty Reinders, pastoral associate, and Sr. Mary Rose Menting, whom he calls “just tremendous people.”

Rather than have a big celebration for his retirement, Fr. Falk has requested that the money — as well as any congratulatory donations people want to send — go instead to a fund for the two sisters.

“That way, they can still be part of this community (into the future), whether they are working here or not,” Fr. Falk said. “If they want to stay, they can.”

The two sisters were completely taken by surprise when they read of his intentions in the bulletin.

“We had no idea he was going to do that,” said Sr. Mary Rose, who serves as parish director of bereavement. “This is just another sign of his generosity and thoughtfulness about others instead of himself. Instead of thinking of his own future, he’s thinking of the others who have worked with him for so long.”

She added that this gesture is just how Fr. Falk has behaved for all his years at St. Thomas More. “You know,” she said, “he never takes a salary and lives very simply.”

Of course, the parish is planning a celebration — to be held after each weekend Mass on Sept. 11 and 12. And they have already named the parish fellowship hall in his honor.

Fr. Falk also attended St. Norbert College. He credits parish priests, the Franciscan Sisters of Christian Charity and the Norbertines with guiding him in his vocation. He also credits his parents for his faith and work ethic — at 10, he was picking vegetables for the local canning company — and for a love of creation.

“As kids, we were very much with nature,” he said. “I was able to see God — in the woods, pollywogs and swamps with cat tails and red winged blackbirds. We did have an appreciation of God’s presence in creation.”

That was the beginning, he feels, of what he now calls his path through priesthood: “a guided pilgrimage.”

“On the pilgrimage,” Fr. Falk said, “I’ve grown in an appreciation of God’s presence in people and in liturgy and the sacraments of the church. I’ve been sensing that more in the last 10 years — how God works through Eucharist and the sacraments.”

While an avid golfer since his days as a caddy at the Oneida Country Club — he still walks the 18 holes each Wednesday — he doesn’t intend to add more golf to his retirement schedule. Nor more card games, though he still plays cribbage with the same group that used to gather “in the rec room” at Central Catholic High.

Instead he hopes to be assigned to a post that will allow him to continue visiting those most in need: especially the sick and dying. He says that not a weekend goes by when he isn’t asked to anoint someone after Mass, or bless a new mother. He is always ready to go to any hospital that calls with an emergency need. On Saturdays, he visits nursing homes, traveling as far as New London and Seymour.

To him, it’s always about being present to people — whether in the nursing home or at the parish school. And he’s been that presence to a couple of generations. One former fourth grader is now his physician at the local VA clinic, where he will begin strength training this month.

Again crediting his parish colleagues with handling so many tasks, he notes that their efforts have allowed him “time for the people; time to celebrate their difficulties, their joys.”

As a self-proclaimed “Vatican II priest,” he hopes that ministry aspect of the priesthood continues to blossom as it has since the 1960s.

“I know about the abuse (of children by priests),” he said, “but I still say the church is wonderful at laying on of hands in the name of Christ — whether that’s the sacrament of the sick, reconciliation, baptism, or any blessing of the people. Hands-on. We can’t get away from that.”

While he does not yet know where he will serve after Sept. 15, he does know one thing: “I’m not done yet. I ain’t what I used to be, but….” Then he laughs.