“The other part of the exhibit, which is really powerful, is the poetry of Noah Pierce,” said Staudenmaier. “He came back to Minnesota after serving in Iraq and after a month, took his own life. Prior to that, he wrote some touching poetry. His mother asked if she could give us some of his poems. One is even handwritten. 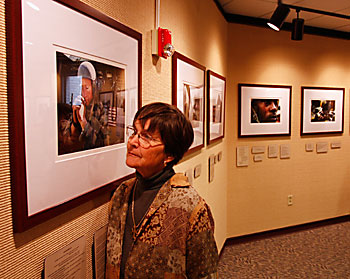 Mary Staudenmaier, a member of Holy Family Parish in Marinette, views one of the photos in the exhibit, “Always Lost,” which she first saw in Nevada. (Rick Evans | For The Compass)

Staudenmaier discovered the exhibit while visiting her sister in Nevada. Her niece was part of a writer’s group that composed the poetry and prose. “Always Lost” was a collaborative effort of the creative writing and sociology students at Western Nevada. The title of the exhibit stems from American writer and poet Gertrude Stein who said, “War is never fatal but always lost. Always lost.”

“I was blown away by the exhibit,” said Staudenmaier. “I asked them what they were going to do with it. They didn’t know. They said they were probably just going to pack it up. I immediately thought about our two-year campus. It took a year to get it ready for travel, but the time and effort was worth it. I believe it should be seen by every American.”

A public forum on the exhibit is scheduled for 7 p.m. on Saturday, Sept. 18, in the Herbert L. Williams Theatre on the UW-Marinette campus. Western Nevada College English professor Marilee Swirczek and instructor Kevin Burns, who led the reformatting of “Always Lost” for travel, will attend. The forum will also feature U.S. Army veteran Amy Smee, a Western Nevada student, who is featured in the exhibit. Members of Noah Pierce’s family also plan to attend.

“This is about creating awareness and honoring those who have given their lives to serve this country,” said Staudenmaier. “I expect it to be a really moving evening. I hope and pray that the theater gets filled.”

“Rather than attempting to make a political statement about war, the exhibit was created to allow viewers to think about all aspects of war, from the families at home to the solider in the trenches,” said Swirczek in a press release.

Admission to the exhibit is free. The UW-Marinette art gallery and library, which house the exhibit, are open from 8 a.m. to 10 p.m. weekdays and the library is open from 11:30 a.m. to 4 p.m. on Saturdays and 1 to 5 p.m. on Sundays. Following the exhibit in Marinette, “Always Lost” will move to UW-Fox Valley in Appleton where it will open on Nov. 11.

“We can keep it as long as we keep it going,” said Staudenmaier. “I’m seeing the impact already with the students here. The parish put a flyer in the bulletin. We’ve tried to get the word out. We want as many people as possible to see it.”

Staudenmaier said that her career background is in banking, so this was her first venture in coordinating an art exhibit.

“It’s not my skill set, but it’s amazing what you learn,” she said. “I’ve learned so much from visiting veteran’s groups. I’ve put a lot of heart and soul in this. It’s one of the most important things I’ve done in my lifetime.”