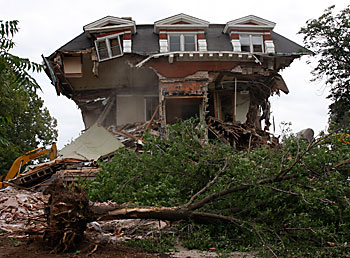 The demolition ended a long evaluation process of the building and property.

A 2005 architectural review estimated it would cost from $1.74 million to $2 million to address deficiencies in the four-floor building in three important areas: fire alarm and fire suppression systems, handicap accessibility, and heating and cooling.

In the spring of 2009, the diocese invited civic leaders and business people to tour the building. “All who toured and inquired reached the same conclusion: The property is deficient in a number of important safety codes,” stated a press release issued by the diocese. An appraiser also valued the property at a higher level with the building removed than with it erected.

Before deciding to demolish, the diocese put the building up for sale in October 2009. However, no feasible written offers to purchase were made, reported the diocese. Also for sale is an adjacent 31,224-square-foot parcel, totaling 1.7 acres. The total value of the properties is $1,034,410.

Some brick was given as souvenirs, but most brick and concrete has already found a new home at the Stone Silo Prairie Gardens, 2325 Oak Ridge Circle, De Pere, where more than 25 truckloads of brick and concrete debris were hauled last week.

“We’re going to use it as fill for the slope up to the second level of this old barn we’re restoring,” said Ceci Kiefer, co-owner with her husband, Dr. Patrick Kiefer, of the nursery, which specializes in native Wisconsin flowers and grasses.

“Old barns were built with sloped banks so they could drive a vehicle to the upper part. But the pressure from the banks would push against the walls and knock them in, so the bank was taken out in the early ’70s. Because of that we haven’t had a way to get up to the second level.

“We’ve had foundation walls built so the walls of the barn won’t have to support that weight and we can create a slope up to the second level. Actually we’re creating a slope on two sides so we can drive up one side and out the other. We’ll cover the bank with gravel, then dirt and then plant grass on it,” said Kiefer, who is a member of Resurrection Parish in Allouez.

She said the whole thing was fortuitous because they had planned to get their fill materials from the new roundabout at G and GV, but that project was recently put off until next year.

So she contacted Deacon Tim Reilly, director of administration for the Diocese of Green Bay, and arranged with him to receive the fill.

“It’s extremely helpful for us,” Kiefer said. “We will put it to good use as part of our project to restore our 100-year-old barn.”

Last May, Bishop David Ricken approved razing the building based on recommendations from the Diocesan Presbyteral Council, Diocesan College of Consultors and the Diocesan Finance Council.

A group opposed to the Chancery’s demolition sought unsuccessfully to have the diocese scrap its plans, petitioning the Village of Allouez to intervene and holding an August rally outside the building.

The Webster Avenue building was built in 1911 as the bishop’s residence. It was converted to office space in the mid-1970s. It was vacated in December 2009 as part of the Green Bay Diocese’s plan to reduce costs and consolidate operations from four buildings to three.

Employees who worked in the Webster Avenue building were relocated to either Melania Hall or the new Chancery (formerly Bosco Hall) on the west side of the campus. The third office building on the diocesan campus is Bona Hall.

According to the diocese, income from the sale of the Chancery property will offset the loss of rental fees the diocese previously received from tenants who occupied Melania and Bosco halls.