When Millie and Jim were married at St. Joseph 50 years ago, their first apartment was on East South River Street in Appleton, so they joined Sacred Heart Parish. “At that time, depending on where you lived, determined where you went to church,” said Millie. 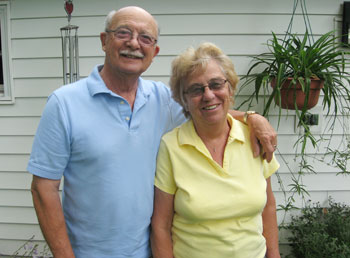 Jim and Millie Mauthie (Amanda Lauer | For The Compass)

St. Bernadette Parish opened its doors in September of 1960 and a few months later the Mauthes built a home on the south side of Appleton and joined the new parish. When their three sons were old enough to start school, they all went to St. Bernadette School. Millie graduated from St. Mary High School in Menasha and Jim was a graduate of Appleton High School, but their boys — John, Joe and Bob — all went to Xavier High School and then on to St. Norbert College.

As a young mother Millie was an active volunteer at St. Bernadette School, working around her part-time job as a nurse at St. Elizabeth Hospital. She volunteered in the hot lunch program, as a school librarian and on the school board.

Both Millie and Jim helped out at the annual parish picnic at the chicken dinner. “We always cut the pies. We were known as the pie people,” recalled Jim, who also served on the parish property and grounds committee.

Jim retired from his career as a firefighter in 1985, and when Millie retired in 1996 they stepped up their volunteer activities. Millie started helping out at Goodwill with their Sack it to Goodwill campaign and convinced Jim to join her.

“From there our volunteer work progressed,” said Millie. “About that same time we were asked to be funeral acolytes at St. Bernadette. We are the Mass servers for all the funerals. We’re both money counters at church. We are greeters at church. We’re both in the prayer shawl group.” Millie is on the worship committee at the parish and belongs to health ministry. Her main duty with that group is doing blood pressure checks at church once a month.

“I crochet and Millie knits and crochets,” noted Jim. “When people get sick or have operations or have a serious problem in the family, we make them prayer shawls. I’m the only gentleman in the group. Lately I’ve been making bride shawls too. When there’s a wedding they give the bride a white shawl.”

Of all the volunteer work that they do, the annual church rummage sale is the most time consuming. Starting the day after school ends in June, the pair works five to six hours, four to five days a week, at the school sorting through and organizing donated items. When the doors opened on the first day of the sale in July, there were 170 people waiting in line to get in. The sale brought in $37,000 for the parish this year.

When Jim and Millie aren’t volunteering, they are busy traveling. They have traveled overseas extensively, including taking trips to South Africa, Europe, South America, Russia, New Zealand, Australia and Iceland. They travel by car throughout the United States as well.

The couple said they enjoy volunteering because of the people they meet.

“It’s the people we work with, it’s like family now,” said Jim. “We go out to lunch, we just respect one another. It gives you a good feeling.”

Millie added, “It helps the organizations and we enjoy doing it.”