“The Communications Department has a phenomenal staff, which has been able to move forward with many new initiatives despite budgetary constraints,” said Deacon DuBois, who worked as a corporate manager at J.J. Keller & Associates in Neenah before joining the diocesan staff. “I look forward to working closely with them to look at even more ways in which we can use a myriad of communication tools to further the mission of the Diocese of Green Bay. My primary responsibilities will be in the areas of The Compass, the diocesan Web site, media relations and computer services.” 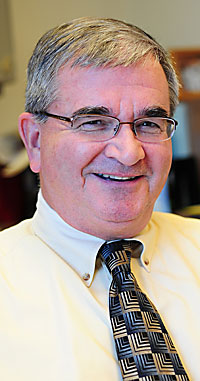 The field of communications is not new to Deacon DuBois. As promotional services director, his role was to communicate the success of Catholic educational programs through marketing efforts.

“During my three and one-half years in the Department of Education, I’ve been able to visit many schools and parishes throughout the 16 counties,” said Deacon DuBois. “I’ve had an opportunity to understand ways in which our varied constituencies receive information, and recognize that, as we develop communication strategies, it’s critical that we understand that ‘one size doesn’t fit all.”

He said the diocese represents people of all ages, education and economic levels. Their use of technology is also wide ranging. “We need to continue to look for ways to create a multi-channel communications program that meets the needs of all the people we serve.”

According to Deacon DuBois, his publishing and information services background, which includes Web site development and the implementation of an e-commerce platform, will serve him well as director of communications.

“For example, two objectives of corporate Web sites are the acquisition of new customers and developing a system of customer relationship management in the context of the corporate mission,” he said. “At the Diocese of Green Bay, those same two objectives can be adapted to meet the needs of the more than 340,000 Catholics whom we serve.”

With new ways to communicate, Deacon DuBois said it’s important for the diocese to stay in tune with technology changes while not abandoning traditional forms of communication.

“It is a continuous challenge to embrace new technology,” he said. “But we are a 21st century church and we will make best use of the tools available to us. … Finding the right formula of embracing social networks, print media and old-fashioned, one-to-one communication will be the keys to our future.”

Deacon DuBois was married for 23 years to Anita DuBois, who passed away last January. They have two children, Patrick, a sophomore at the University of Notre Dame in Indiana, and Megan, an eighth grader at St. Joseph Middle School in Appleton. Deacon DuBois was ordained to the diaconate on May 15, 2004, and is assigned to St. Gabriel the Archangel Parish in Neenah. He also serves as associate campus minister at Xavier High School in Appleton.

Deacon DuBois said his two predecessors in the Communications Department, Tony Kuick and Renae Bauer, “leave an awesome legacy of accomplishment and respect throughout the diocese. Following their leads, I will attempt to carry on that tradition.” 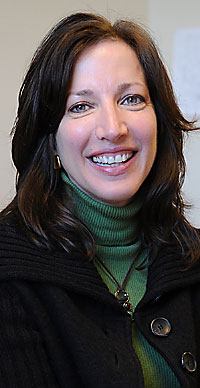 Bauer said her new job will focus on sharing the Bay Settlement Sisters’ stories with their key constituencies, both through traditional media and online social media. “I like variety in my work so this should be a lot of fun,” she said.

Bauer and her husband, Josh Dietrich, who is also employed by the diocese as director of the Bishop’s Appeal, became new parents on May 31. “I knew I wanted to make our daughter a priority, which meant finding a way to work fewer hours so I could have more time to be a mom,” she said. Her new post will provide “a more traditional 40-hour work week.”

According to Bauer, working for the Diocese of Green Bay has been a blessing.

“First, my intellectual knowledge of what it means to be Catholic has grown exponentially,” she said. “The growth has been possible because of countless colleagues — both in the diocesan offices and in the parishes — who, over 13 years, have taken time to explain our theology or church teachings on countless topics.”

Serving the diocese has also nurtured her spiritual growth, she added, and has been an opportunity to meet “some incredible people. They have all been models of faith for me. I know I have been given a rare opportunity to actually work for the church and grow in my faith simultaneously.”

In her years with the diocese, Bauer said she has enjoyed seeing several major initiatives get off the ground thanks to collaboration between departments. But she will especially remember the support her colleagues displayed for each other.

“If there was a tragedy in someone’s life, we would come together and figure out a way to help the family and let them know we were there to support them,” she said. “I’ve never experienced such kindness and such a genuine sense of being ‘my brother’s keeper’ like I have here. Conversely, when there was something to celebrate, we did that, too.”