“If you think about travel at that time by horse, it probably took two to two-and-a-half hours, which today is a five-minute drive,” said Gary VanHoof, a parishioner who is writing a St. Nicholas history book in recognition of the anniversary. 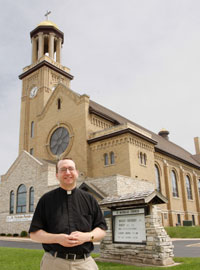 Fr. Dave Hoffman, pastor of St. Nicholas Parish in Freedom, stands in front of the church that is a historic landmark. (Rick Evans | For The Compass)

The first church, a wooden structure, was built in 1860, and Capuchin Fr. Gerard Spierings was the first resident pastor. The parish was named St. Nicholas in honor of Nicholas July, who donated five acres of land for the church.

“Think back to 1917, the time of the first World War,” said VanHoof. “The area was predominately farming. How did they build a church that big and that beautiful? That’s a miracle in itself.”

VanHoof has been chronicling the history of the parish in bulletin entries since the beginning of the year. He will compile the entire history in book form by year’s end. The anniversary celebration began in December of 2009. A new pictorial directory was released and Fr. Dave Hoffman, pastor at St. Nicholas, gave magnetic bookmarks, featuring a picture of the church, to the children of the parish as Christmas gifts. The bookmarks were also made available to parishioners.

“We tried to spread out events throughout the years as a reminder,” said Bowers. “We have a cookbook connected with the parish anniversary. We had a four-day mission with Fr. (Paul) Nomellini, which was really good. Our large anniversary banner has been up since the first of January.”

The committee also offered a wine and cheese social in May. A local wine maker created labels with pictures of the church for the bottles. Parishioners could buy the wine. Countryfest was held in July and the parish sold tote bags featuring a depiction of the church as part of the anniversary.

The Sept. 11 Mass and dinner are a culmination of the celebration, said Bowers. Past pastors, the School Sisters of Notre Dame, who staffed St. Nicholas School for much of its history, and sons and daughters of the parish who have gone into religious life have been invited.

VanHoof said that Fr. Leander Nickel, who served as pastor at St. Nicholas from 1979 to 1990, will be taking part in the celebration. Fr. Dennis Ryan, pastor from 1990 to 2005, is unable to attend, but is scheduled to visit the parish at the time his period in parish history is covered in the bulletin entries, added VanHoof. Fr. Ryan, now pastor of St. Bernard Parish, Appleton, led a $750,000 renovation of St. Nicholas Church in 2001.

“The renewing of the spirituality of the church through the renovation was an ongoing expression of God’s love for his people and the people’s love for the church,” said Fr. Ryan. “I simply was part of the committee that took responsibility for the church’s renewed spiritual development.”

A new altar, baptismal font and tabernacle chapel were among the updates. Previous renovation projects included a $30,000 modernization in 1967, led by Fr. Al Hietpas, and a new entrance in 1995.

VanHoof, who has been a member of the parish for most of his life, recalls the 1967 renovation, which involved the removal of the altar, which everyone believed was ceramic. It turned out to be plaster of paris, he said. He was impressed with the changes in 2001 and the restoration of some existing features.

“The pictures of the 12 apostles and a couple murals were cleaned up,” said VanHoof. “They really came to life. The glass was cleaned on the outside. A second clear glass (pane) was later added to keep it clean and protected.”

“The priest that built that church had a true blessing to tell a faith story to the church through the stained glass windows,” said Fr. Ryan. “There is a dialogue from the north side windows that leads to the south side. The church is structured as an inverted ship, popular theology that the church rides on seven crosses for seven sacraments.”

Fr. Ryan added that he is thankful to have been part of the parish’s history.

“It was a true joy to continue the work of a long line of priests and sisters who had been there fostering the life of the parish and the school,” he said. “Each of us takes part in doing what we can to make that faith come alive and grow. I was fortunate to have a lot of people’s support.”

Bowers praised the work of the anniversary committee for making the year of celebration a success. In addition to the co-chairs, VanHoof, Fr. Hoffman, Deacons Don Newhouse and Greg Humpal, A New Genesis Sr. Carol Haanen, pastoral associate and liturgist, and Betty Schwandt, director of faith formation, served on the committee. The Mass will showcase a 150th anniversary choir, said Sr. Carol.

“We have a lot of musical talent here,” she said. “We have seven keyboard players, more than some of the big parishes have.

“There are just wonderful people here,” she added. “It has that sense of tradition, a lot of people who have been here for all their lives. There is also a new flux of people coming in. It’s an evolving community.”

Freedom’s location as a midpoint between Green Bay and the Fox Valley has helped the community and the parish prosper, said VanHoof. The church is easy to find, he added.

“Up until the 1960s, the steeple was the tallest structure in Outagamie County,” he said. “It’s the first thing you see when coming to town from either direction.”

Sr. Haanen, who has served at the parish for four years, said that she hopes the anniversary is not only a time for reflection, but a time to plan for the future.

“We are looking at this as a time for gratitude, a time for vision,” she said. “It’s a good time for looking back and looking forward.”

“We’ve had a great committee,” said Fr. Hoffman. “They are a great group. I’ve learned many things about the parish this year. I’m a little bit of a historian myself, more into military history. When we look to the past, it helps us look to the future.”

He points to the large number of young parishioners in support of a bright future for St. Nicholas.

“Teenagers come together for Mass or on their own,” he said. “We have a lot of young people involved. We also have to remember the faith of the people who built this church. The parish has a wonderful 150 years of history and good things will continue to happen in the name of Jesus Christ.”