He’s put a face on homelessness

Guilbeault, who is currently the president of the board of directors of the Fox Valley Warming Shelter, got involved with this mission through his work with the St. Vincent de Paul Society. “I joined the board in February of 2008. The group was fairly new at that time. It came into existence because there was a void. The Salvation Army had previously operated a warming shelter in the area but they discontinued that. I was asked to be on the board because they were struggling with organizational things and since I had been on the St. Vinnie board for six years as president and another four years as a member, I had experience with non-profits. I also have a human resources background so they thought that might be valuable. A year ago I stepped in as president.” 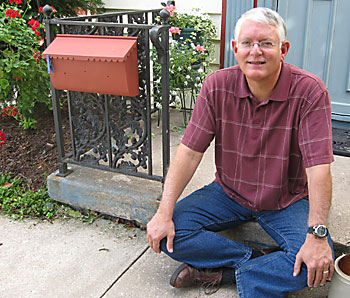 Previous to joining the board, Guilbeault had no background in assisting the homeless.

“The thing about the warming shelter is it’s the most basic step of housing. At St. Vinnie’s you care for the poor, but it’s kind of from a distance. When I started on the board I also started volunteering at the shelter. Then you start seeing the clients face to face and you find out the scary image you had of homeless people was not accurate.”

An experience in 2007 actually helped make Guilbeault open to working with people struggling with homelessness. He participated in a program at his parish called JustFaith. “It’s a faith-building course. It’s more than something where you just learn some stuff,” he said. “It’s an attitude-changing formation process. It was a life-changing experience for me. It wasn’t so much a mental exercise as it was an eye-opening experience. I feel like the St. Vinnie’s thing was a step in the right direction but I wanted to be more closely aligned with the people that were receiving the help.”

The warming shelter originally was based at St. Joseph Church in Appleton but then started rotating among local churches of various denominations. On Oct. 17 the shelter will have a permanent home on the St. Vincent de Paul that is located along West College Avenue in Appleton. The building will be open year round, rather than just in the cold-weather months. With the new building comes expanded hours of operation. The shelter will be open from 5 p.m. until 8 a.m. An evening meal will be provided by local churches. The executive director and at least one staff member will be on hand at all times to watch over the men and women using the shelter.

The average daily attendance at the warming shelter last year was 22 clients but on the coldest days they were sheltering about 30 people. The new site is on a bus line to make it accessible for their clients. The word will get out that there is a new location. “That population is fairly well networked among themselves,” noted Guilbeault.

Guilbeault finds working with the homeless an enjoyable undertaking. “If people have experience in either a meal program that involves the homeless or a shelter program that involves the homeless and they meet the people face to face, the fears vanish and they feel comfortable and they’re actually rewarded. There’s a sense of knowing that they’re doing what they’re supposed to do and there’s no fear anymore. They’re relating to people as people and it becomes very comfortable. You almost have to experience it to find out that it’s something that you’d like to do again because it’s such a heart-warming experience.”

Volunteers are welcome to step forward to help at the shelter. It isn’t that hard to serve a meal or check on someone and it’s so worthwhile, said Guilbeault. “Almost universally the clients express their gratitude because they know they’re in a tough spot. They know that somebody’s providing this and it takes resources. They are absolutely grateful.”