Priests learn how to assist people hurt by abortion 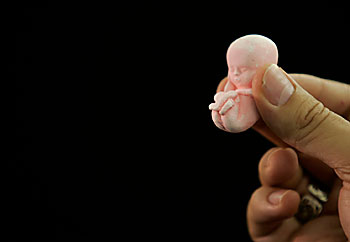 Vicki Thorn, founder of Project Rachel and executive director of the National Office of Post-Abortion Reconciliation and Healing, was on hand to help priests recognize some of the signs that accompany post-abortion trauma and discuss how to help grieving people.

During his opening talk at the in-service for priests, sponsored by the diocesan Respect Life Office, Bishop Ricken recalled an event that put the topic of abortion in a new and disquieting light. At a recent diocesan youth retreat, a 15-year-old girl was found crying before a crucifix. “One of the youth ministers went up to her and said, ‘Can I help you?’ and what came out was that this 15-year-old girl has already had three abortions,” said Bishop Ricken. “So brothers, this is getting to be a very serious societal problem among Catholics. I would say we are (needed) now more than we’ve ever been as far as our catechesis, our pastoral preaching and reaching out because there are so many broken families.”

Having Project Rachel available to help priests in their ministry is important because they sometimes do not know how to address the topic, said Bishop Ricken.

“I don’t know about you, but when I’ve heard confessions and it involves abortion, sometimes I feel helpless, not knowing what to do, what to say,” he said.

After giving an overview of Project Rachel’s origins, Thorn told the priests that it is important for them to know the role priests play.

“From the beginning priests were at the core of this ministry,” she said. “What you do, what you say, your presence is so important to the walking wounded that you encounter — and they are everywhere.”

She said that while some 50 million abortions take place each year in the United States, it is difficult to know exactly how many people have been touched by them.

“Why do I say we don’t know? Because abortion didn’t start with Roe v. Wade,” she said. “It’s been forever a human problem. So we need to know there are old women in our congregations and in our nursing homes who have had abortions.”

“If you get a call from the nursing home or the hospital that Mrs. So-and-So should have died yesterday but she’s so agitated. Get your stole and get to the hospital and say to her, ‘There’s nothing that God can’t forgive,’ and then name a couple of the favorite sins of your parish and put abortion in there. You’ll see her eyes fill with tears,” she said.

Older women did not have counseling or support after abortions, Thorn continued. “They went to confession many times, but in death there’s a series of questions they need answered and you can be the person” to answer them.

Thorn reminded the priests that abortion touches everyone and she shared personal experiences of friends and relatives who had abortions.

“Anybody we know could have had an abortion — anybody,” she said. “Your sisters, your mom, your aunts, your best friend. It’s everywhere. It’s an epidemic.”

Thorn talked extensively about the impact of abortion on women’s health, including an increased risk of being diagnosed with cancer.

“We live in a society that says (having an abortion is) just like an appendectomy or having your tonsils out,” she said. “No it’s not, because you’re forever carrying this biological memory in your body. Furthermore, you started a pregnancy and you didn’t finish it. That has implications. Our first pregnancy as women is very important to changes in our body. It’s critical. So there are lots of things that happen here in terms of this abortion loss.”

For example, she said, women carry cells from every child they’ve ever conceived the rest of their lives. “It’s called microchimerism. If there is an abortion or there is a miscarriage, there are even more cells transferred than in a full-term birth.”

Thorn also cited research by a cancer specialist in Seattle who discovered that girls under 18 who have abortions, and who have a history of breast cancer in their immediate families, increased their risk of breast cancer by 100 percent.

Thorn told the priests that she understood the challenges they face talking about abortion.

“I know that when it comes to pro-life stuff you can’t do anything right,” she said. “Because whatever you say, someone’s going to be unhappy with you. It’s either too much or not enough.”

She called abortion a “heart debate (because) people are so impassioned” about the issue. Thorn told the priests that when an angry parishioner confronts them at church, “Don’t argue with them because nobody’s ever been argued into the pro-life movement. Simply say to them, ‘Why don’t you share with me why you feel so strongly about this. I’d like to understand.’

“Shut up and just let them talk,” Thorn continued. “When they are done, thank them. If you can, lay your hand on their arm. Gentlemen, 20 seconds of touch is powerful healing in people. It sets off that chemistry of connection.”

By following these steps, she told the priests, “You broke a stereotype because they were convinced you were going to yell at them and argue with them. You listened to them; you heard them, which is different than just listening. Now all of that toxicity that was sitting in their gut is gone. And pretty soon you might find them in your office.”

During a lunch break, Thorn told The Compass that offering presentations to priests is a key to post-abortion healing. “It empowers them. They realize this is stuff they don’t know (and) they can use on many counts. Not only as a confessor, but as a priest who’s doing marriage prep and family ministry,” she said.

“I think the key to Vicki’s presentation is the need for an understanding of the long-term effects abortion has on the person — male and female, said Fr. Bob Kabat, pastor of St. John the Baptist Parish in Seymour. “As church and priests, we need to handle with great care and humbly admit how little we know of the long-term pain a person experiences from the abortion.”

Fr. Mark Vander Steeg, pastor of St. Mary Parish in Greenville and St. Edward Parish in Mackville, said he gained a better understanding of how to reach out to men and women who have been hurt by abortion.

“This is not simply a sacramental healing and all is well,” he said. “Indeed, God fully forgives but the healing from the consequences of this tragedy can take a lifetime. We as church are unique in our loving committment to stay with men and women as long as it takes. (Thorn) reiterated again and again that we do not back away from truth but we present truth with great love and compassion, as God does.”

Fr. Paul Demuth, pastor at St. Elizabeth Ann Seton Parish in Green Bay, and Fr. John Doerfler, chancellor of the diocese, found Thorn’s discussion about cellular links between a mother and an unborn child inspiring. “The biological connections of the mother and father with their child substantiate the reality behind the pain they have to face in the healing process after an abortion,” said Fr. Demuth.

“The fact that a mother carries cells from all of her children in her body was particularly moving and will be helpful information to share about a mother’s lasting connection with the child within her womb,” said Fr. Doerfler.

The priests were given a Project Rachel post-abortion resource manual issued by the U.S. Conference of Catholic Bishops. The manual also included online resources and handouts written by Thorn. The materials are also being mailed out to all diocesan priests, said Tina Pallini, respect life consultant for the Green Bay Diocese.