Bartels points to a 3-D puzzle as an example. The puzzle would sell for 50 cents in the thrift store, but fetches $12 online. 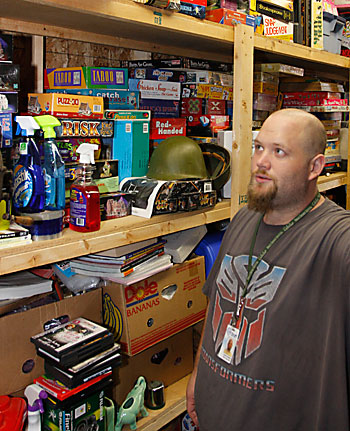 Jeremy Bartels, coordinator of the Green Bay St. Vincent de Paul’s eBay store, displays shelves of games and puzzles that are sold online. Bartels said the store has about 1,000 items for sale online and the items fetch an average of $4,000 a month. (Rick Evans | For The Compass)

The eBay store began as a volunteer run project, but evolved into needing an employee to lead the operation. Bartels, who has served in several roles at St. Vincent de Paul, was selected due to his personal eBay experience. He is responsible for deciding what is sold online, determining the price and photographing and listing the items.

“There are people (volunteer sorters) around here that have a history of online shopping or flea markets,” said Bartels. “They will bring an item to me and say, ‘I think it’s worth something.’ They are getting to know what to give me. For example, people who normally put out puzzles and games know that if they see a themed Monopoly game like Star Wars Monopoly, to give it to me.”

St. Vincent de Paul has approximately 1,000 items for sale online. The St. Vincent de Paul eBay store has on average 250 to 300 listings at a time in such categories as sports memorabilia, kitchenware and home decor. Approximately 700 books, DVDs and CDs are listed on half.com, an eBay company. Not only do the cyber stores allow for higher sale prices, but also for the listing of items that cannot be sold in the thrift store.

“We normally would not sell Lite-Brites because the pieces get all over the floor and make a mess,” said Bartels. “I can bag up the Lite-Brite pieces and sell them by the pound. We actually get more per pound for those than if we sold the whole Lite-Brite.

“I have some Nintendos and Play Station 2s that are broken, absolutely do not work,” he added. “I can sell those online for $20 each. People will buy them for parts or repair them. I have five Nintendos. That’s $100 for stuff that would normally get thrown out, or we would have to pay to dispose. We have some knee braces with a water cooling system. Normally, we would throw them out or try to find a mission that would take them. We can sell them for $80 a piece on eBay.”

Bartels lists items both as auctions and with fixed prices utilizing eBay’s “Buy It Now” feature. Shipping is calculated on the Web site based on the weight of the item and the buyer’s zip code. St. Vincent de Paul has shipped to approximately 50 countries and six continents. Local online buyers have the option to pick up purchased items at the thrift store. Bartels emphasizes that online sales have not diminished the thrift store inventory.

“There is a lot of stuff in here (the eBay room at St. Vincent de Paul), but if you look at the total volume of what we put downstairs (in the thrift store), it’s like .5 percent. It has taken away some stuff from the shelves, but that’s why I like to put the run of the mill stuff like board games online, so the store is not hurting without anything nice. I also like selling the oddball things that you wouldn’t think would be worth money. There are a lot of things I can get $50 for online or $30 in the store, so we sell it in the store.”

Online sale items are shipped at least twice a week. Volunteer Al Majewski of Green Bay boxes the items. He said that he is often surprised at what sells, the prices and where it is going.

“We’ve shipped twice to China,” said Majewski. “Glass is the hardest thing to ship. You have to use a lot of bubble wrap.”

Majewski added that a vintage lawnmower sold to a customer in New York was among the most challenging shipments. The lawnmower, from the 1920s, was made out of cast aluminum. Some items are not sold online because of potential damage in delivery.

“There is a line where it’s just not worth the risk,” said Bartels. “There was a chandelier in here. Yeah, I could have made some money off of it, but we likely would have had an insurance claim.”

The current St. Vincent de Paul store, located at 1529 Leo Frigo Way, opened in 1991. The store operated at various previous locations and dates back to 1957 when Bishop Stanislaus Bona reinstated the Society of St. Vincent de Paul, which had been disbanded by Bishop Paul Rhode. The mission of the Catholic lay organization is to offer person-to-person service to those who are needy or suffering. Last year, the St. Vincent de Paul store generated more than $790,000 for assistance to needy persons in the community. Online sales will continue to support the mission, said Bartels.

“I still think of this in its beginning stages,” he said. “It’s definitely helped. You can’t advertise specific things in the store. We sold a CD for $100 on half.com. It was a gold edition of some sort. If you put that in the store, you would get $1. You can’t argue with the results.”

A link for the St. Vincent de Paul eBay store is available at www.svdpgb.org.