Photos, essays make this coffee table book a keeper, but where are photo credits?

The Compass just received a reviewer’s copy of a new book on Pope Benedict XVI titled, “Benedict XVI: Essays and Reflections on His Papacy.” The 224-page hard cover book (including index) was edited by Sr. Mary Ann Walsh, a Religious Sister of Mercy and director of media relations for the U.S. Conference of Catholic Bishops.

The book is a beautiful compilation of essays and reflections on the pope’s first five years as Vicar of Christ, with many compelling stories and anecdotes from U.S. prelates and USCCB officials. 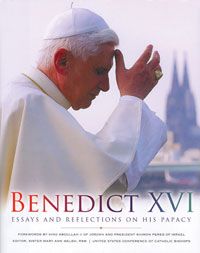 It also features a greeting from Cardinal Tarcisio Bertone, Vatican Secretary of State; forewards from King Abdullah II of Jordan and Israeli President Shimon Peres, both of whom Pope Benedict visited in May 2009 during a trip to the Holy Land; a preface by Chicago Cardinal Francis George, president of the USCCB; and an overview of the pope’s first five years by John Thavis, Rome bureau chief for Catholic News Service.

Anyone who is interested in the papacy, the life of Joseph Ratzinger and his election to the pontificate will find this book a great addition to their bookshelf.

To whet your appetite, here are just a few titles of the 37 essays featured in the book: “Shepherding Cats,” “Searing Pain of Abuse,” “Faith and Political Life,” “First Justice, Then Charity,” “Finding God in Everyone” and “Music: Joy to His World.”

In the chapter, “Shepherding Cats,” Don Clemmer reveals that, after his election as pope, people learned of Benedict’s love of cats.

“Cardinal Tarcisio Berton, Vatican secretary of state, told the media stories of the former Cardinal Ratzinger talking to cats, cats following him from his apartment to his office and Swiss Guards joking that his cats were laying siege to the Vatican,” writes Clemmer.

As a Catholic journalist with a love of photography, I found the coffee table book’s most enduring quality to be the photographs that bring the essays to life. Some of the best images ever taken of Pope Benedict were used to illustrate the first five years of his papacy.

To be sure, the book would not receive the same acclamation it deserves if it weren’t for the beautiful, glossy color photographs that fill nearly every other page of the book. Kudos to the editor and publisher for their fine choice of photos.

But herein lies my only disappointment with “Benedict XVI: Essays and Reflections on His Papacy”: While each of the essays and reflections is credited to its author, not one of the photos gives credit to its photographer. Perhaps the publishers found this to be too challenging a task or felt the credits would somehow distract from the book’s primary objective of telling the pope’s story.

However, without the photographs, this book would be incomplete. This seems like reason enough, in a publication of this nature, to credit the photojournalists. In fairness, it should be mentioned that the origin of each photo is identified by the contributing organization. These include L’Osservatore Romano, Catholic News Service, Catholic Press Photo and CNS/Pool. But that hardly qualifies as credit to the creator of each photograph.

Some may see this argument as overreaction, but others like myself see the oversight as a publishing faux pas.