Community service a way of life

Walsh, a De Pere native, devoted much of his life to serving the community that he has always called home. He will be honored for his service with the 2010 Civis Princeps Silver Knight Award at De Pere Community Night, Nov. 2, at St. Norbert College. 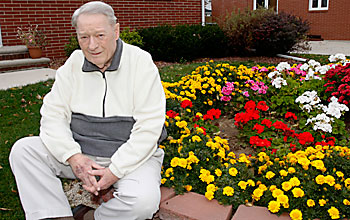 “It was a surprise,” said Walsh. “I didn’t expect this. I wasn’t looking for any type of recognition.”

“I enjoyed doing it,” said Walsh. “I just felt as though it was part of my life. I did whatever I could. Whatever came up, I joined in. I liked everything I was involved in. They all stick in the back of my mind like it was yesterday.”

Walsh’s Catholic education at St. Francis School provided a strong foundation, he added. He was taught by the School Sisters of Notre Dame and praises the priests who have served the parish. He provided his own leadership service at St. Francis Xavier.

“When they started the church council, I was on the committee,” said Walsh. “When we had it all set, the bylaws, I was the first parish council president. I took it for what it was worth. I worked hard at it with the other members. There were a lot of good members on all the committees.”

Some of Walsh’s service ventures took unexpected turns. He was the last appointed member of the De Pere School Board (an elected position ever since). He expected a short stay, but ended up serving the board for 13 years. Walsh was a member of the city council for three terms, after vowing that he would never get involved in elections.

“I enjoyed it. It was fun,” he said. “Everything I had taken part in was a good education. I learned a lot from each one of the things I was involved in and met a lot of people.”

Walsh served in many capacities while raising five children with his wife, Millie. The couple has been married for 62 years and has seven grandchildren and six great-grandchildren.

“We only lived a block away from each other growing up,” said Walsh. “She had belonged to St. Mary’s. I always kidded the pastor over there that I rescued her from St. Mary’s.”

His example of service rubbed off on his son Mike, the mayor of De Pere.

“He’s mentioned it many times,” said Walsh referring to Mike following his service lead. “I may be a little prejudiced, but I think he’s done a good job.”

Walsh continues to help out by serving meals at the NEW Community Shelter. He has also volunteered his time for the past 30 years at Cotter Funeral Home, De Pere, assisting with funerals and visitations.

“We’ve been friends with the Cotter family for years,” said Walsh. “I fell into it. When I retired, I did it more often. It’s kind of nice to help and I’ve seen people at funerals that I haven’t seen in years.”

Walsh encourages people to get involved as a way of living out their faith.

“I learned a lot from all this,” he said. “I always took the attitude to sit back and listen, see how things are going, learn a little bit before trying to add something. You’re not always right, but you hope you’re doing the right things. I was very fortunate how things turned out.

“I didn’t do any of this on my own,” he added. “I received copies of letters that people sent in (to the Silver Knight selection committee) on my behalf. I’m very grateful. It’s been very rewarding. We did a lot of things with kids.”