Domestic violence is topic of inaugural ‘Voices of Men’ gathering

Last Thursday’s breakfast event launched Brown County Voices of Men, an effort that encourages men to help end violence against women and girls. More than 300 men made a promise at the gathering. Standing in unison, they pledged to “not commit, condone or remain silent about men’s violence against women.” The men also donned white ribbons to be worn for a week to symbolize their pledge. 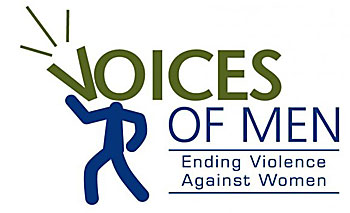 Tony Porter, co-founder of “A Call to Men: The National Association of Men and Women Committed to Ending Violence Against Women,” delivered the keynote at the breakfast. Porter, an author, educator and activist, works with the NFL, NBA and colleges and universities throughout the country. He challenged the men in the room to “show up, stand up and speak up against violence against women.”

Porter emphasized the connection between “well-meaning” men and the 15 to 20 percent in the United States who perpetrate domestic and sexual violence against women.

“We’ve been taught that they’re the bad guys and we’re the good guys,” he added. “They do bad things and we do good things. There is a collective socialization among all men, good guys and bad guys alike. It is that collective socialization among all men that fosters this relationship between us and them, and allows them to be who they are in our presence.”

The event featured skits, including a coach calling youth football players by demeaning gender names, a man objectifying a woman and two men failing to respond to domestic violence in their neighborhood. The stories in the role-playing support the formula that placing less value in women, plus treating women as property, plus objectification of women, equals violence against women, said Porter. He also discussed the “Man Box,” the social norms, culture and traditional images of manhood that have created an environment that supports, tolerates and sometimes encourages men’s violence against women.

“Women don’t need to be protected, men need to behave,” said Porter. “We need to teach our boys what that means. Why haven’t we spoken up? The criminal justice system alone cannot handle it themselves. Will you speak up? Will you stand up?”

Kocos shared his story in hopes that it will encourage a call to action. He admitted that it’s challenging to revisit his past, but wants to help others in abusive families.

“Hopefully now we will go out and influence 300 or maybe even 700 more people,” he said. “That’s the way you create societal change. I will always live with the reality that whatever we do in these areas has to always be a work in progress. Sustainability is always a challenge. That’s why the message has to be consistent, repeated and supported.”

Kocos, a member of the Brown County Voices of Men planning committee, works with children in the Green Bay Public Schools, where he supervises the extended learning and after school programs.

“I’m in a position where I can continue to bring additional resources for children, especially those who have some challenging home circumstances,” he said. “It’s rewarding in a sense that I do get to see a lot of the positive that occurs in the community at all levels.”

Forms were distributed at the breakfast inviting men to join Voices of Men, bring awareness to others, support events designed to prevent domestic violence, serve as a mentor to a male child and volunteer at Golden House and the Sexual Assault Center.

“Because part of our program is a 40-bed shelter facility, we always have maintenance things that need to be done, upkeep of the facility,” said Faulkner. “In addition, we train volunteers to answer our 24-hour help line. We have opportunities to join victims in court and assist them just by being there. There are opportunities for people to be involved in fund-raisers. We can find something to match your skills.”

Faulkner added that she was impressed with the turnout at the breakfast and hopes it promotes change.

“There are more numbers of people working to eliminate violence in women’s lives,” she said. “Even if they are not working, volunteering, donating or doing something physical, it’s changed their mindset and how they operate in their day-to-day lives. I hope they will stand up, will speak up, that they won’t condone this type of violence against women.”